Active Volcanoes in the Lesser Antilles 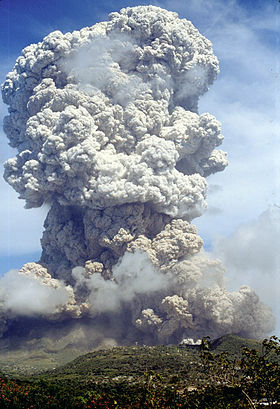 The Lesser Antilles island arc is a curved chain of volcanoes ~850 km in length located between Puerto Rico and Venezuela. This is where the Caribbean plate meets the Atlantic crust belonging to North American plate. Currently, there are five active volcanoes in the Lesser Antilles arc. (Teaser photo to Left credit, Montserrat Volcano Observatory) From north to south first is Montserrat’s Soufrière Hills volcano which is ~915 meters high with a major eruption in 1995 and has continued to be active, even during Expedition 340 (visit the Montserrat Volcano Observatory, http://www.mvo.ms/; credit for first photo below to left, Adam Stinton, 340 Volcanologist).

During the expedition 139 cores from 4 sites and 8 holes have been collected from the seafloor near Montserrat. The second active volcano is the tallest volcano in the chain is La Soufrière volcano on the island of Guadeloupe and is 1,467 meters tall (Center photo, credit OVSG). The third active volcano is Martinique’s Mount Pelèe where one of the worst volcanic disasters of the 20th century occurred during a devastating eruption in 1902, where ~30,000 people lost their lives. Mount Pelèe is ~2 million years old and is ~1397 meters high (Right photo, credit IPGP).

The fourth active volcano is Saint Vincent’s La Soufrière volcano which rises 1234 meters and is on the largest island in the chain. The fifth active volcano is found underwater as a submarine or seamount that is 1300 meters above the seafloor and ~180 meters below the sea’s surface. It is named Kick-‘em-Jenny (perhaps because of the rough waters in the area) and is between the islands of Grenada and Ronde. The largest eruption was in 1939 and it sent steam and debris 275 meters into the air. Kick-‘em-Jenny erupted again in 2001. The volcanoes on Montserrat and Martinique are continuously watched by geophysicists and volcanologist at the Montserrat Volcano Observatory – MVO (http://www.mvo.ms/) and the Observatory of Martinique – OVSM (http://www.ipgp.fr/pages/030303.php?langue=1).

During Expedition 340 we are drilling cores from the seafloor to collect submarine (underwater) deposits of volcanic debris near the volcanoes on the islands of Montserrat and Martinique. These cores will provide a more complete picture of the eruptive history of the volcanoes and teach us what happens to the volcanic material when it enters the ocean. The eruptive volcanic material that settles in the sea is volcaniclastics (rock fragments) and tephra (ash and pumice fallout).

Most of the time, a volcanoes solid parts pile up around the vent and form a steep-sided mountain such as the Soufrière Hills Volcano in Montserrat. But there are some volcanoes that are broad mountains with gentle slopes and even some which are simply holes or slits in the ground. The active volcanoes in the Lesser Antilles are composite or strato volcanoes that have a steep volcanic cone that is built up by lava flows and pyroclastic debris. These volcanoes produce lava domes (construction) and undergo dome collapses (destruction).

Lava domes can come in many shapes and sizes. The lava that forms domes is often too sluggish and sticky (very viscous) to flow very far. It is unable to flow away from the vent and forms a thick pile. This pile solidifies around the volcano’s vent in a mound shape to become its dome. Lava formed in this way is called dome rock and is much denser than pumice. This is the construction of a volcano, when eruptive material is accumulated. A dome collapse is the destruction of a lava dome caused partially or completely by gravitational forces.

The most common type of volcanic (igneous) rock is Basalt and it is composed of ~50% silica (SiO2). Basalt is the most common type of rock in the oceanic crust. Andesite is another type of volcanic rock composed of more silica (54-64%) than basalt. The Soufriere Hills volcano on Montserrat erupts andesite lava. Pumice is a porous rock formed during explosive eruptions and can be up to 80% bubbles (and may float). As 340 scientists anticipated Andesite has been the most abundant volcanic rock type found throughout the cores collected thus far during Expedition 340.

The Lesser Antilles arc results from the subduction of the Atlantic plate beneath the Caribbean plate and creates magma that has high concentrations of silica (andesite rocks), gases like CO2, and H2O vapor from the subducted sediments. Subduction zone volcanoes (melting plate and overlying sediments) have lots of silica and usually erupt in an extremely violent manner.