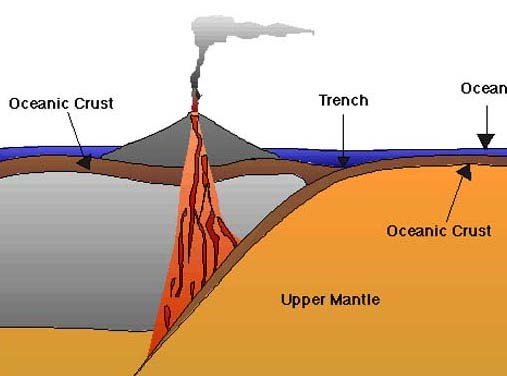 During expedition 340 we are drilling submarine sediment deposits along a chain of active volcanoes in order to reconstruct the eruption history over millions of years and to better understand modern day risks. Scientists are attempting to assemble a geologic puzzle by examining deep ocean cores of marine sediments (bioclastic and volcaniclastic turbidites) and tephra (deposits from explosive volcanism) layers. Volcanism along the arc of the Lesser Antilles began ~40 million years ago when two tectonic plates moved towards one another. The Lesser Antilles are on the Caribbean tectonic plate.

When two tectonic plates move toward each other, two things can happen—either the rocks pile up and form mountains, or one plate moves below the other. When one plate moves below another it is called subduction. This is what is happening in the Lesser Antilles. In the figure above the Atlantic plate is subducting beneath the Caribbean Plate. The green color is land and the red dots mark areas where subduction is occurring. The current convergence rates of the plates are relatively slow at 2-4 cm/year and magma production is generally low.

This is an image of the seafloor bathymetry or water depths around the islands of the Lesser Antilles. The blue is the deepest water depths and red is shallowest water. From the image above where is the deepest water around the islands, east or west side of islands? What body of water is located on the East side of the islands? Photo credit, IODP Science Report Expedition 340: Volcanoes and Landslides Lesser Antilles

This photo shows the two volcanic island chains that formed the Lesser Antilles and the submarine shelf extending underwater from each island where volcanic deposits accumulate  (Left); this side of the photo outlines the estimated range of the debris from the avalanche deposits of volcanic material, the stars indicate where there are active volcanoes. Photo credit, IODP Science Report Expedition 340: Volcanoes and Landslides Lesser Antilles

The geologic history of Lesser Antilles is complicated as reflected in the structure and rock composition of various islands. North of Dominica, the arc is divided into two island chains, sitting on top of a Cretaceous ocean island arc. The eastern chain is an older extinct arc, and is largely covered by thick carbonate platforms. The western chain is the site of active volcanism since ~20 million years ago. South of Dominica, the older and recent arcs are superimposed, forming one chain of islands bordered to the west by the 2900 meter deep back arc Grenada Basin. Expedition 340 is collecting ocean cores from the western chain near Montserrat and the merged southern chain on the west side of Martinique.

Through ocean drilling scientists want to tell the history of the sediments and rocks. The top meters of sediment cores tell the history over a few thousand years, while deeper sediment cores tell history over a few million years, depending on the sedimentation rate. On March 28, 2012, we are about 50 nm away from the island of Martinique and are seeing lots of volcanic material in cores.

Much planning over many years took place before the Expedition 340 set sail. Scientists conducted seismic profiles, a bathymetric survey and collected short piston cores (7 meters) to determine the best locations to sample before the Expedition. Now the JR is drilling for cores at deeper depths and scientists will be able to better constrain the volcanic history of the Lesser Antilles’ arc in space and time. Some of the 340 scientists have been studying this region for over 20 years. Their in-depth understanding is very helpful for the rest of the team to understand the complex system we are studying. Photo credit, IODP Science Report Expedition 340: Volcanoes and Landslides Lesser Antilles