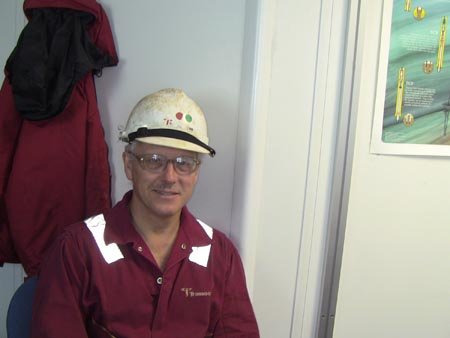 We are scheduled to reach site 3 around 6 pm today; its offical name is U1367. Each hole in the IODP (Integrated Ocean Drilling Program) is numbered sequentially. When more than one hole is drilled at a location (which is typical), a letter designation is added. For example, the first hole that we will drill will be known as U1367A. The second hole U1367B, etc. We are getting closer to an ocean ridge as we move eastward and the sediment layer is getting thinner as would be expected. The ship will be humming with activity as the first core comes up early tomorrow.

Today the skies are very clear and we are experiencing some winds. Yesterday, we were visited by several albatrosses; otherwise there is no bird life this far out in the Pacific. Today, I will highlight one of the crew members.

Ken Minto is the chief mechanic on the JOIDES Resolution, a very important job to the scientists who want to drill into the ocean floor. Ken grew up in the town of Fleetwood, in Lancashire, England and he is the fourth generation of his family to work on ships.Ken went to work for Transocean when an acquaintance at a party asked him if he would be interested in the fast-track program (a training program) at Transocean. After about 6 months, he joined other vessels within the company as a Stand-In Chief Mechanic. Then in 2009, Ken joined the JOIDES Resolution as Chief Mechanic, which he greatly enjoys. He really likes the view from atop the drilling derrick even though it can sway back and forth considerably! Ken’s responsible for maintaining everything associated with the drilling operations of the ship and he also helps out in other departments when needed.

In his spare time, Ken likes to run vintage cars and motorcycles and he also likes horology, the science of measuring time. He has a workshop at his home where he enjoys working on clocks and watches. In addition to these things, he keeps in shape by playing cricket. Ken is the father of two grown daughters who also like to stay active by playing hockey and netball, which is similar to basketball.