Arrive at Second Leg: What happens next? 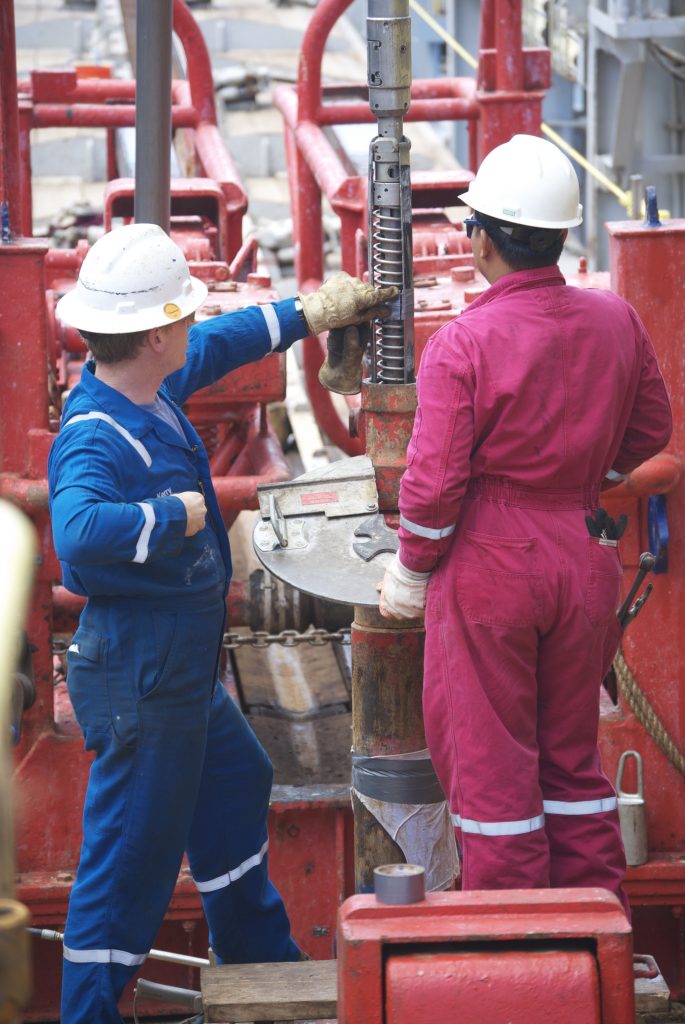 Once the vessel is positioned at a site, the thrusters are lowered and a positioning beacon is dropped to the seafloor. The dynamic positioning (DP) control of the vessel uses navigational input from the GPS and triangulation to the seafloor beacon. Then the drilling operations start by tripping pipe into the sea floor, followed by a survey of the seafloor using an underwater camera system to ensure that it is free of obstructions. Okay, then up to six miles of pipe are positioned in the ocean, dropped from the deck of the ship. The drillstring and drill bit are rotated, with the DP thrusters keeping the vessel in place so only the drill moves. This ocean drilling operation is a significant engineering feat in itself. Teaser photo credit, Angela Slagle, 340 Logging Staff Scientist

The JR’s Dynamic Positioning System (DP), supported by 12 powerful thrusters and 2 propellers, uses computers to maintain the ship over a specific location while drilling in waters as deep as 8,200 meters (5 miles, 27,000 feet). The desired position for ocean drilling activities is entered into the DP computers then data from two global positioning systems, better known as GPS, and one hydro acoustic beacon on the seabed are fed into the DP computers to give a real time position. If the ship moves from the desired position, these data are processed and a resultant force is applied by the thrusters and propellers to move the ship back to the desired drilling location. A gyro compass input ensures the ship's heading is maintained in the same way. Read more at https://joidesresolution.org//node/7; for more information about dynamic positioning, watch our video on the scientific drilling process.

Choosing the appropriate coring system
During expedition 340 we begin coring with the APC system, followed by the XCB system. The Advance Piston Corer or APC system cuts soft-sediment cores with minimal coring disturbance and is crucial for high-resolution paleoceanographic studies of submarine deposits especially ash (volcanic origin) that our expedition is studying. APC coring continues until the drill can go no further in the hole (called refusal), then the drill team switches to Extended Core Barrel or XCB coring system, which continues until the XCB core is refused or target depth is reached. The XCB system is used to advance the hole usually when the formation becames either too stiff for the APC system or when drilling hard substrate. The XCB can cause core disturbance and sometimes pieces of core are broken into rotated discs called ‘biscuits’ as a result of the drilling process. Fortunately, our expedition has not yet recovered any sea ‘biscuits.’ For examples of 'biscuits' visit Expedition 339. Photo below compares an APC core with a Rotary Core Barrel (RBC); credit IODP photo library

Assembling the drill string
The derrick rig suspends up to 9,150 m (30,020 ft) of drill pipe to an ocean depth as great as 8,235 m (27,018 ft). This is about the equivalent of six miles! During the second leg of Expedition 340 we may suspend over 5000 m of drill pipe when sampling near the Grenada Basin offshore from Martinique.

Near the center of the research vessel is the “moon pool,” a 7m (23 ft) wide hole, through which the drillstring (formed when all the drill pipes are joined together) is lowered into the ocean. Each piece of pipe is about 28m (93 ft) and weighs about 874 kg (1925 lb—just a tad more than a draft horse). The drill crew uses the draw works to thread each pipe to the drill string. The process of lowering the drill bit, which is affixed to the end of the drillstring, takes about 12 hours in 5,500 m (18,045 ft) of water.

To core through the seafloor, the crew uses a motorized system to rotate the entire drill string. The thrusters on the ship keep the massive vessel itself from rotating. This scientific drilling process recurs on several sites during each JOIDES Resolution expedition. (Each expedition portion is called a “leg.”); photo credit, Angela Slagle, 340 Logging Staff Scientist