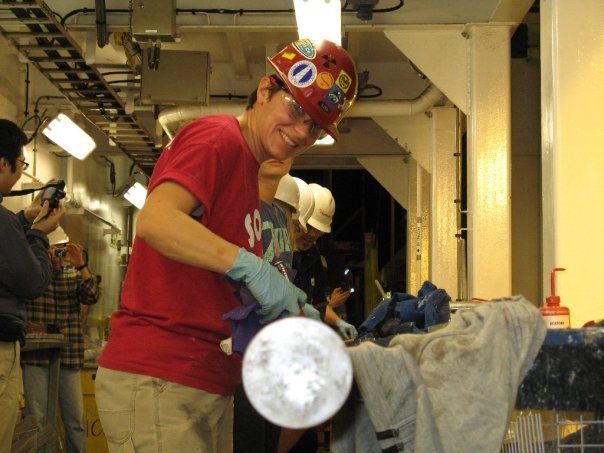 Coring is continuing at site U1371 but not without some problems. The ocean swell has been rather large and this has put wear and tear on the wire line used to recover cores. Yesterday, the wire line broke and several hours had to be used to retrieve the piston corer that fell to the bottom of the hole. Today the seas don’t seem to be quite as bad but the ship is still rocking. Everything seems to be back to normal today. The JR has two Assistant Lab Officers (ALO) and I would like to tell you about one of them.

Lisa Crowder is one of the two Assistant Lab Officers aboard Expedition 329 of the JOIDES Resolution. She grew up near Portland, Oregon. While growing up, she liked hiking; going to the beach, going to the local science museum, and just being outdoors. This would explain her interest in the earth sciences. In high school, Lisa had a good biology teacher and she found that she did well in science and it was only natural for her to follow this interest when she went to college. She received her undergraduate degrees in Earth Science and Biology from Pacific Lutheran University in Tacoma, Washington. She then went on to earn a masters degree in geology from UC Santa Barbara.

While in graduate school, her advisor steered her in the direction of geological oceanography. This is when she went on her first cruise ever; a three-month voyage that took her to Tahiti and Easter Island. Now Lisa is experiencing her twentieth cruise on the JR and she still enjoys being out to sea.Her duties, as Assistant Lab Officer, are varied. She makes sure the cores move through the various labs in an efficient manner, makes sure needed science supplies are ordered and arrive on time for each expedition, and acts as curator when needed.

In her spare time, Lisa likes to play soccer, participate in triathlons, and play guitar.