Be prepared for the unexpected 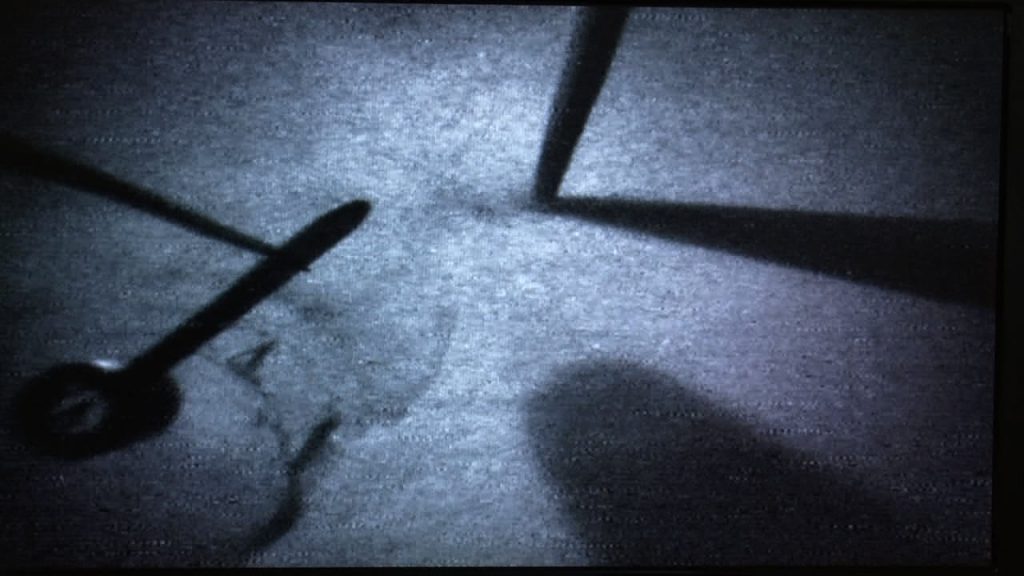 Seafloor drilling is a technologically challenging task, and sometimes things don’t go as planned.  We have now twice run into unusual problems, but because of excellent planning by our co-chiefs and staff scientist, work has progressed despite these obstacles.  If one wants to do research like this, they better have plans and backup plans and even backups to the backup plans!

The picture you see above is a screen shot taken by a camera deployed to see what’s going on at the seafloor.  The pole coming down from the top of the photo is the drill string (the drill bit is at the bottom of the drill string) trying to re-enter the seafloor.  After drilling for a few days at one site, it is necessary to change the drill bit because it gets worn down as it cuts through rock.  This is a standard procedure here on the JOIDES Resolution.  99% of the time, there is no problem going back into the same borehole (this is called re-entering), usually because a re-entry cone helps guide the bit and drill string back into the hole.  The re-entry cone looks like a funnel.  You can’t see it in the photo, but unfortunately for us, the re-entry cone fell on it’s side at this hole!  That is partly because this site, U1373A, has little sedimentary cover and it’s hard for the cone to sit straight on the hard, bare rock bottom we found here.  After trying for a few hours, it was decided to abandon this site and go to an alternative site that the co-chiefs (Anthony Koppers from Oregon State University and Toshitsugu Yamazaki from the Geological Survey of Japan) and staff scientist (Jörg Geldmacher) had wisely asked for permission to drill just a few days ago, should things go wrong at site U1373A.  It’s a good thing they thought ahead!  Now we are starting to drill on the other side of the same seamount as U1373A.  Because this is the other side of the seamount, we are likely to experience different lava flows here than at U1373A, so it should be interesting scientifically.

That’s not all, though.  We also had to abandon the first site, U1372A, after the drill string got stuck in it.  As a matter of fact, we needed to use explosives just to release the rest of the drill string from the section that was stuck.  This also was a very rare occurrence (the drill string getting stuck).  In that case, Anthony, Toshi and Jörg got together and planned to come to the seamount we are currently drilling as a backup plan.

This all goes to show that seafloor drilling is exciting work, but you need to be prepared for unexpected situations and have adaptable research plans.  Part of how I have tried to have backup plans is by planning multiple types of experiments (sample collection for shore-based research, incubation assays, and cultivation of subseafloor microbes) so that if one doesn’t work out, hopefully the others will.  Of course, I will be happiest if they all work out, but we’ll see…

Before I go, I want to thank Lisa Strong, our videographer, for supplying the image above as well as the images of me in the cold room a few blogs back.  You’ll see some more photos from her of me trying to find out how fast the microbes at these sites are growing- that’s next time at this blog.