Be prepared for the unexpected
Seamount Lasagna 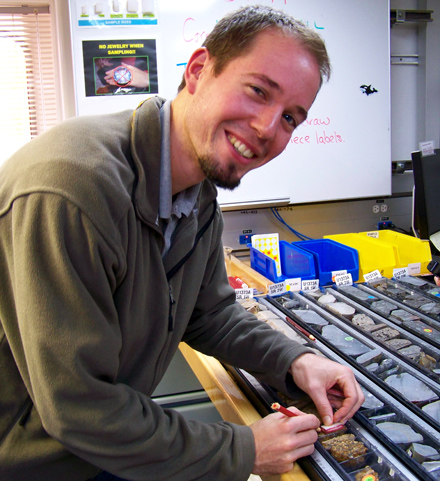 Meet David Buchs, one of the geologists onboard the JOIDES Resolution, and find out how sedimentary rock can tell him what a seamount was like when it used to be an island.

If you were Rockperson and you were on the Louisville Seamount Trail expedition with us, then David Buchs would be interested in your sedimentary superpowers. David is a geologist who knows a lot about all three kinds of rocks (igneous, sedimentary and metamorphic), but here on the JOIDES Resolution, he is specializing in just one of them.

You can see sedimentary rocks in the photo of David. They are the yellowish core segments by his hands. Those particular rocks are made up of the sand from the beach that was on the seamount when it was an island about 70 million years ago!

Sedimentary rocks often have fossils in them. David will look at thin pieces cut from the rock under a microscope to see what sort of fossils are in them. He also takes high-resolution photos through the microscope of the rock so he can view them on a computer (that is what I am looking at in the photo).

Most of the fossils are tiny pieces of shell leftover from animals and microbes. From those, David can tell what kind of habitats were on and around the island. David can also tell from the fossils about how long ago the seamount used to be an island.

David is very interested in how volcanic islands appear and then disappear back under the ocean. He did not grow up near the ocean, though. He grew up in Switzerland. He became interested in geology when he was 6 years old and he found a fossil in the Jura Mountains near where he lived (the word “Jurassic” is named after the Jura Mountains). He took many science classes in high school and then when he went to university, he received degrees in geology, including his Ph.D. He is currently doing research for the Australian National University. David really like being a geologist, but he also enjoys photography and sailing. He also likes music and used to play saxophone in a band.

If you are interesting in learning more about what the Earth used to be like, then studying sedimentary rocks is a great way to do that. That is just of the many cool things that geologists are able to do!