Scales Are Not Just For Fish: A Blog Series about Time and Space in Geology
Just swell! 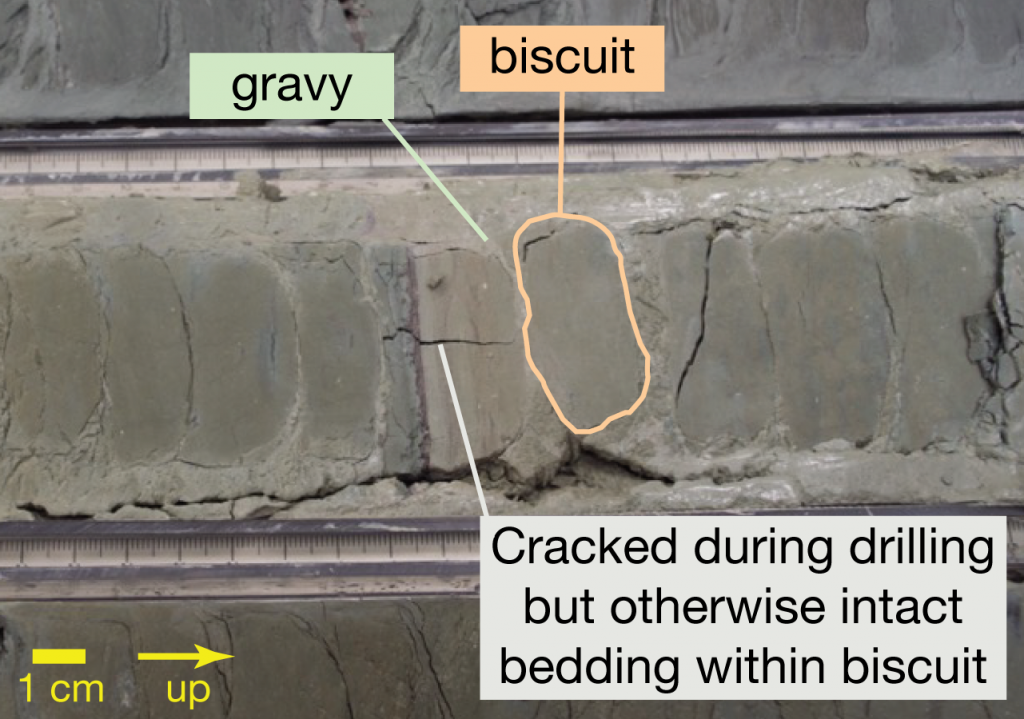 Drilling can alter the core in a variety of ways. This morning, the core on the description tables is made of “biscuits and gravy”: coherent chunks of compacted sediments separated by a muddy matrix of ground up core that gets squeezed into the core barrel in between the biscuits. Why does this happen and what can it tell us?

The variety of ways drilling can alter the core deserves a handbook.  The geologists making the core descriptions have the beginnings of one, and their observations will help us turn the changes to the core because of the drilling process into useful information about the way these sediments might behave when they get to the subduction zone about 200 km to our East.  After all, that is one of our goals on Expedition 362: Sumatra Seismogenic Zone.

If you’re just joining us, here’s a reminder about what we’re after.   Along the margin between the down-going plate and the overriding plate in a subduction zone, sediments can collect in a big wedge.  This is called an “accretionary wedge” or “accretionary prism” because the sediments get scraped off the down-going plate and stuck onto (accreted to) the overriding plate.  New sediments are always being brought into the system because they’re traveling on the incoming, eventually subducted tectonic plate*.  Usually these accreted sediments are quite soft, filled with water between the grains, and not likely to break into faults until they reach high pressure and elevated temperature much farther into the subduction zone.

The accretionary wedge at the North Sumatra margin is weird for a few reasons.  It’s very thick and not wedge-shaped (it doesn’t have an approximately triangular cross section).  The 4-5 km of sediment traveling in on the incoming Indian Plate that get accreted create a plateau up to 10 or even 15km thick from the seafloor surface down to the subducting plate.  Recent earthquakes have made us rethink its role in how the subduction margin functions.  Instead of the typical triangular prism shape, it’s a flat plateau that’s almost rectangular if you cut it in cross section perpendicular to its long-axis (hamburger, not hot-dog).  That is, if you were traveling along the seafloor from the eastern Indian Ocean, you’d come across a steep slope of accreted sediment.  Once you climb the slope, it would be a fairly flat walk to the Aceh Basin on the eastern side.  When you’re standing in the Aceh Basin, you’re above the area where we usually find subduction zone earthquakes.  After crossing this wide valley, you’d reach the island of Sumatra, where the volcanic arc is forming above the subduction zone.

On the North Sumatra margin, the M 9.1 earthquake on 26 Dec. 2004 happened further west beneath the plateau area, which made the width of the earthquake rupture across the margin much larger.  This is part of the reason the 2004 earthquake was so big.  The ruptured area where the two plates slid past each other was also extremely long, possibly as long as 1600 km (1000 miles)!  The bigger the area that slips during an earthquake, the more powerful the earthquake.  Where the rupture starts influences how far it can go in different directions, and therefore how big the earthquake could get.

Typically, the large subduction zone earthquakes start at depth of tens of kilometers and then break through across and along the plate boundary interface over a very large area.  In 2004, the earthquake started under the seafloor offshore of Sumatra, at ~40 km depth and may have continued to a depth nearly as shallow as 5 km.  It is the very large area of the fault that moved that gives the earthquake so much power.  (More on what earthquake magnitude means in a later post.)  We’re curious what controls the location of the plate boundary fault between the down-going plate and the accretionary plateau as well as the changes the sediments undergo between deposition hundreds of kilometers away from the trench and when they reach the subduction margin, carried by the moving plate.

We’d like to see the sediments as fresh and pristine as possible so we can know everything about them before they start to change in the extreme conditions of the subduction zone.  But drilling into the ocean floor is tricky business.  We started coring using the Advanced Piston Corer (APC) method.  This sends a core barrel down and sucks up a tube-shape of sediment.  We can tell the orientation of these cores in space—that is, not just which way is up but also which way is north.  Sucking the core into the core barrel causes deformation to the sediments if they’re not very well compacted.  When the sediments become too stiff to use the APC method, we switch to a different coring technique.  We no longer have orientation information aside from up, but we can drill through more compacted sediment.

Because XCB uses rotating parts, the core gets sheared around its outside and can get broken up into pieces inside.  This happens when the material is fairly coherent and can survive as chunks, like well-compacted mud.  The sheared outer stuff is very soft and gets pushed in between the chunks.  It’s a bit like biscuits and gravy, apparently, so this type of drilling deformation gets this silly (but informative) name!

How easily the sediment gets broken into blocks can be a clue about the strength of the sediments.  If they’re stronger—more resistant to deformation—they’ll break apart less easily and remain as bigger blocks.  But if the sediments are not well compacted and weak—they get sheared easily—then they might end up being entirely gravy.  This is useful for the structural geology team as they play time forward in their minds, moving the Indian Plate toward the Sumatra subduction zone: What will these sediments behave like when they reach the subduction zone and accretionary plateau and experience stress from the tectonic plates moving toward each other?  As Peter, the leader of the structural geology team, says, “That’s the $64,000 question.”

*If you have visited the San Francisco Bay Area or Big Sur in California, you may have seen ancient accretionary wedge rocks.  I was just there on a field trip, so I’ll make a separate post about that soon!