Biscuits and Gravy
Attack the mud! 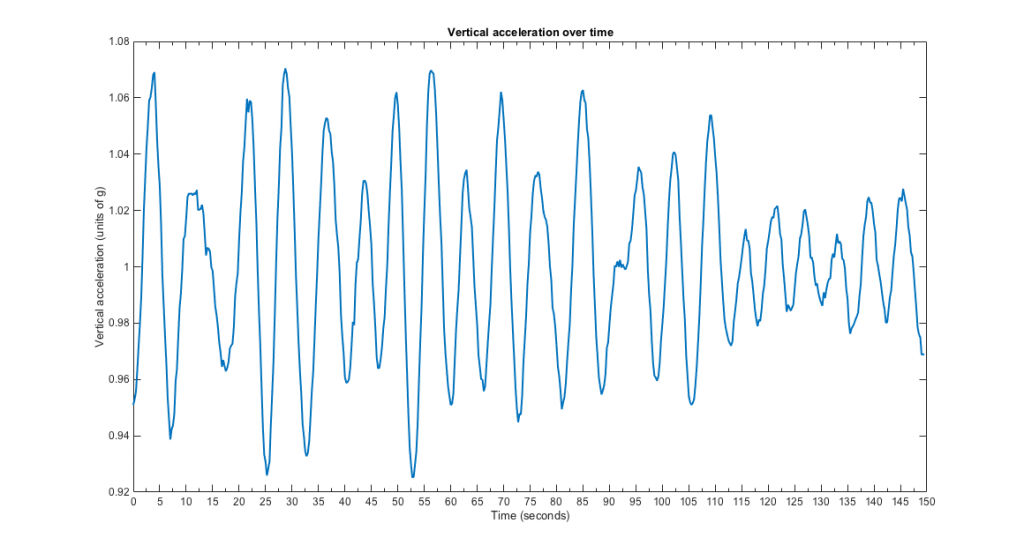 Some people from home have asked us what life aboard the ship is like.  Naomi posted about that earlier, and I’ll use my home-made record of ship motion to do the same but in a (typically) tangential fashion with plenty of digressions.

Cores have been coming up pretty regularly recently, though most of them have been nearly or entirely empty.  Seeing the core liner come up sloshing with sand and water or, even worse, see just one person carrying it (the cores should be pretty heavy) while the tail flops along behind is anticlimactic, kind of like opening a birthday gift…only to find out it’s underwear.  And not neat underwear with rocket ships.  The boring sort.  We hear the “core on deck” call and get all suited up (hardhat and safety glasses, so I guess it’s not too big a deal), head up to the core deck…and find  sand or water flowing out.  I’ve still been taking the so-called “headspace” samples to analyze for hydrocarbons (see my previous post on waiting for core), but without too much else going on, I’ve had a chance to catch up on some other work that needs to be done.

And that is where you, my dear reader, will benefit (I hope).  I’ve been weighing a lot of ground up freeze-dried mud/sand recently to prepare it for carbonate and elemental analysis.  Weighing things — particularly down to the fraction of a milligram — on a ship is not straightforward.  The motion of the ship changes the apparent weight, something you feel when the swell is rough.  Our solution is simply to record and average the masses over a period of time.  There are more clever solutions out there, but this old microbalance we have seems to do the best at measuring very small masses.  It’s connected to a computer that reads 100 masses as the ship rocks underneath and averages them into a decent estimate of the actual mass.  But the best part of all that is that the screen gives a depiction of how the mass is changing with each reading, and by the end of the 100 readings, you end up with a pretty good record of the ship’s motion, recorded as changes in the apparent mass of what you’re weighing.

That got me thinking (never a good thing).  Older laptops, before solid state memory was used, have accelerometers to detect if the computer falls because a fall could damage the spinning disk and reader.  Basically these models are portable motion recorders and can even be used as seismometers to measure earthquakes or footsteps or the like.  And because I have one of these old laptops with me, I downloaded SeisMac, a free little program from the IRIS (Incorporated Research Institute for Seismology) website.  They have other programs designed to work with PC/Linux as well, and if you get the chance, I highly recommend checking out other parts of their site too.  They do an incredible job of making seismology (and earth science in general) accessible with animations and applications and really good visualizations of abstract processes.

Once I had my computer calibrated (I set it on top of the ICP-OES, one of our larger instruments that has a bit of vibrational dampening — I’ll explain why it needs that later), I set it on a lab bench and let it run for a few hours, and after a bit of smoothing and (a lot of) downsampling, I got the image at the top of the post.

I’ll do some processing of the full “boat-grams” (not true seismograms after all) to see what else we can persuade them to tell us, and I’ll be sure to post the results.  I’ll also see if I can put up a little animation of what the motion looks like based on my boat-gram.  But for now, and for the people who have been curious about what life on board is like, I encourage you to get your hands on either an older laptop or a smartphone/tablet, because I believe these also have 3 accelerometers (to measure the 3 directions of acceleration).  Find one of the free apps out there to record acceleration, and have a look at the boat-gram.  If you move your laptop/smart-thing to reproduce the boat-gram, you’ll get a good sense of the motion we feel out here on the swell.  You’ll have to move slowly though because the swell is long period (i.e. the waves only move us substantially on the scale of seconds, not quicker).  And then if you close your eyes (be careful not to lose your balance, although we do that sometimes too) and imagine the hum of the freeze drier, the creaking of some of the wall-mounted instruments, and the incessant shifting of tools in the drawers, you’ll get a good sense of what being in the chem lab is like (minus the whole chemistry part).