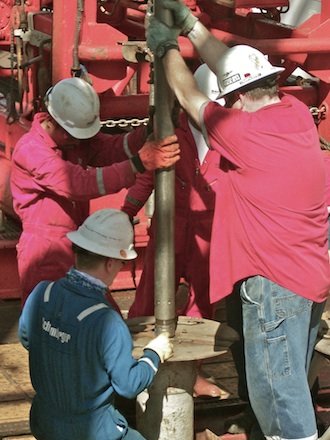 The drill team does an incredible job bringing up cores in tricky situations!

Cores continue to come in from Hole U1413C today, and we are at about 290 mbsf. The cores are much more lithified, which means “rock-like,” and continue to contain carbonates.

We know they contain carbonates because drops of hydrochloric acid make them bubble.

Here is a reaction for all of the chemistry students out there to balance: Hydrochloric acid (HCl) reacts with calcium carbonate (CaCO3) to make calcium chloride (CaCl2) and water (H2O) and carbon dioxide gas (CO2). It is the CO2 gas that makes the bubbles! Shells (see photo below) are also made of CaCO3 , so if there are any shells, micro- or macroscopic, they will also bubble with CO2 if you put acid on them.

I first met Gemma Maxwell when I went to Education Officer training at Texas A&M, where I also got to meet the other three education officers on upcoming expeditions. She gave us the tour of the Core Repository there, which is a huge warehouse full of cores in carefully organized stacks kept at freezing temperature.

This repository is open to any scientist that wants to look at these cores. Gemma is the curator, which means she is responsible for all cores on JR expeditions “from the catwalk to the repository.” The catwalk is what they call the deck outside the Core Lab on the ship where the cores are brought to immediately after bringing them up from the ocean.  Here on the JR, we keep the cores in racks in the lab until they get transfered to a big refridgerator in the hold of the ship until it goes back to the U.S.

There are only three core repositories in the world! One is at Texas A&M, where sediment cores are stored if taken from the Gulf of Mexico, the Pacific Ocean, and the Southern Ocean. Another repository is in Bremen, Germany, and it is responsible for all sediment cores from the Arctic and Atlantic Oceans. The third is the Kochi Core Center in Japan, and they store cores from the Indian Ocean.

Gemma is responsible for the onboard core sampling plan, and also coordinates scientists requests from around the world that want a particular sample of a particular core from a particular expedition. Gemma has a B.S. in Environmental Geosciences, and an M.S. in Geography, both at Texas A&M.

From the Helo Deck, close to the subduction zone…