Bubbly Cores
Of Kites and Cores 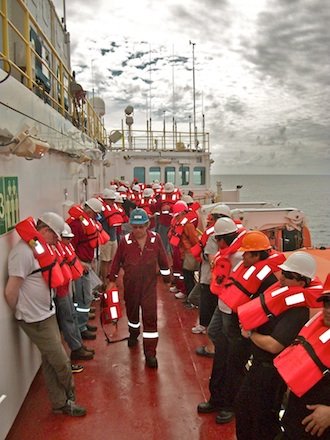 Fire Drill! Grab your helmet, safety glasses, and life jacket! Run up the stairs to your station and check in with the man with the clipboard! Pass muster?

This is how the cores were described in today’s science report: “…a monotonous series of strongly consolidated, mildly calcareous, greenish gray silty claystone to siltstone,” with a few ash layers becoming more frequent with depth, and a few wood and leaf fragments. The nannofossils found in the cores show they were deposited in the Pleistocene age! (from about 2.6 million years ago to 12,000 years ago – when the last glacial period ended).  As of this afternoon, we were down to almost 500 meters below sea floor (mbsf)!

In the Chemistry and Microbiology Lab, inorganic geochemists Dr. Miriam Kastner, Dr. Evan Soloman, and Dr. Marta Torres are trying to track the fluids that flow through and are trapped in the tiny spaces in-between grains of rock in the earth’s crust. This water is called “pore water,” and it can give clues as to how these fluids affect global seawater chemistry.  These fluids are also related to the carbon cycles that affect the evolution of life forms and also the amount of carbon dioxide in the atmosphere throughout the history of the Earth.

It is hard to believe that there is water inside these rocks!

Seawater chemistry can tell us a great deal about how the entire Earth functions as a system, and can even give us clues to as to when and how quickly the Himalayan Mountains began to form and became so high!  You can track the formation of the tallest mountain range in the world by looking at the history of the Earth through seawater influenced by the pore water in deeply buried sediments.  These fluids also have a great deal to do with earthquakes! They lubricate the plate boundaries, and also cause underground pressure to increase or decrease in different places. This lubricating, shifting, and changing pressure can cause changes in the Earth’s crust, and changes in the Earth’s crust can lead to…earthquakes!

Approximately every two or three weeks, our wonderful kitchen staff puts on a spectacular barbeque for everyone at the picnic tables just under the Bridge Deck at the front of the ship.  Barbeque burgers, chicken, and corn come right off the grill, and there is a multitude of side dishes and goodies to go along with this outdoor feast.  Everyone gets a chance to enjoy the sunshine and good food!

This also gave the ship’s photographer, John Beck, a chance to photograph the entire science team, herding us together for a group photo at the bow.

Every birthday that happens on the ship gets a cake! Today is the birthday of Physical Properties specialist Mari Hamahashi and so everyone gathered in the galley to sing “Happy Birthday!”

From the subduction zone…