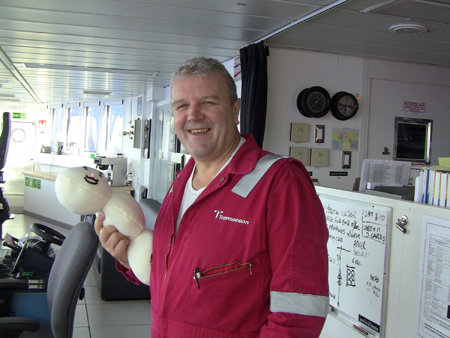 Hi! What do you think of my mustache? Many of the crew members are sporting mustaches during November to support prostate cancer research. Enough about me, today I am going to tell you about the captain of the JOIDES Resolution.

Captain Alex Simpson, is the JR’s captain. He is responsible for everything that goes on aboard the ship, so he oversees lots of people. Captain Alex grew up in Scotland, in a small mining village, and went out to sea at the age of 17 years old. He has worked on many types of ships, such as ones that carry cargo and timber, among others. When I asked him about his job, he told me that it is the best marine (ocean) job that you could ever have. Captain Alex is very comfortable being out in the ocean. He got to be captain by working hard, having a good attitude, and looking ahead to see where he wanted to be in life.

One of the things that makes working on the JR so nice, is that many of the crewmembers have worked on board for a long time and everyone has gotten to know each other. On many other types of ships, the crews change often, so you don’t really get to know one another.

Over the years, Captain Alex has traveled to many places, but his favorite place is "home," with his family. He has been married for 34 years and has two sons, a daughter, and is the proud grandparent of a grandson. In his spare time, he likes to play golf and take cruises.