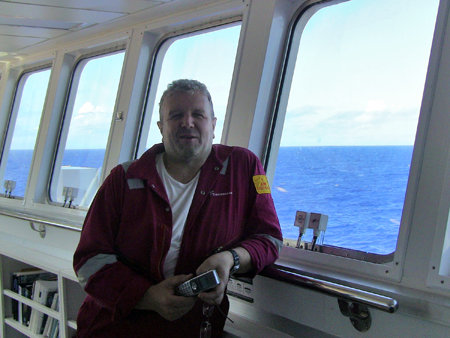 Alex Simpson is the Captain of the JOIDES Resolution. He is responsible for everything that goes on aboard the ship, so he oversees many people. He grew up in Scotland, in a small mining village and left at the age of 17 to work on ships, such as cargo vessels, bulk carrier, and vessels used to transport timber. He has been sailing for over 37 years and is well within his comfort zone at sea.

Captain Alex says that being captain of the JR is the best marine job that you could ever have. He rose to the rank of Captain by lots of hard work, which like anything else worthwhile in life, requires studying, perseverance, having a good attitude, taking the initiative, and looking ahead. He has sailed on the JOIDES Resolution for nine years. One of the things that make sailing on the JR so enjoyable is that many of the crewmembers have been here for a long time and everyone gets to know each other. The atmosphere aboard a scientific vessel is much more relaxed than when working aboard a commercial vessel. In his many years at sea, Captain Alex has traveled to many places and seen lots of interesting things.

Out of all of his travels, his favorite place is "Home," enjoying time with his family. During his time at home, he likes to play golf and take cruises. The captain has been married for 34 years and has two sons, a daughter, and one grandson.