360 Video: Core on Deck
The crucial role of ice shelves 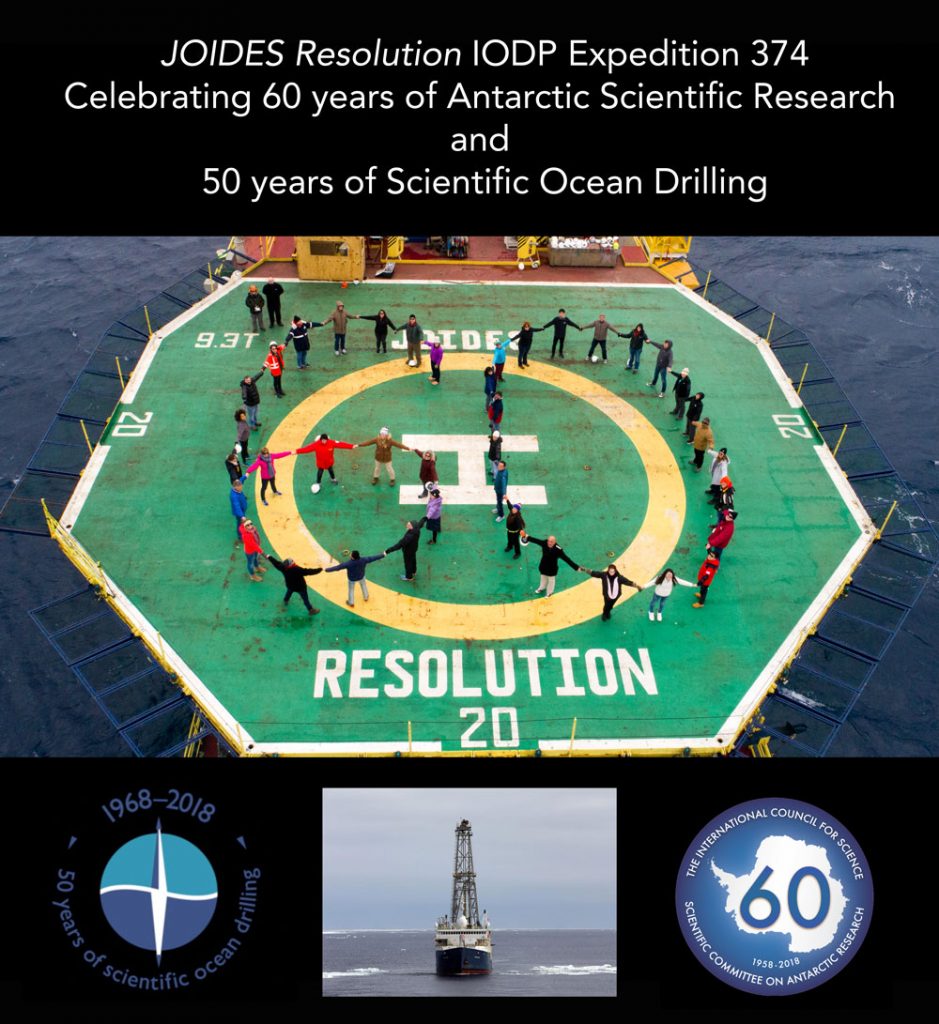 SCAR, with a membership representing the scientific communities of 43 countries, is an international network of thousands of scientists who share a common ambition to carry out Antarctic science for the benefit of society. SCAR scientific programs cover geological, biological, and physical sciences and are instrumental in initiating, developing and coordinating high quality international scientific research in the Antarctic and the Southern Ocean https://www.scar.org/general-scar-news/60-years/

The SCAR/Geoscience PAIS (Past Antarctic Ice Sheet dynamics) program https://www.scar.org/science/pais/pais/ has carried out coordinated action for the past 5 years to design depth and longitudinal transects of deep drilling expeditions along the West Antarctic Ice Sheet margin in collaboration with IODP. IODP scheduled drilling activities over the next two years include the ongoing Expedition 374 in the Ross Sea (2018), and in 2019, Expedition 379 in the Amundsen Sea and Expedition 382 in “iceberg alley” in the Atlantic sector of the Southern Ocean and on the South Falkland Slope Drift. IODP Proposal 732 proposes to drill along the Antarctic Peninsula and is available to be scheduled in 2021. Mission Specific Platform Expedition 373 along the George V Land coast will also be rescheduled in this timeframe. These IODP expeditions are tightly linked and highly complementary to obtain continental-scale understanding of how different sectors of the Antarctic ice sheets have responded to elevated levels of CO2 and warming climates in the past. The results will provide much-needed constraints to models for simulating past and future global sea level rise.

SCAR coordination has helped to design and carry out Antarctic cruises by many nations since the 1980s, with the aim of collecting site survey data for ODP and IODP expeditions. 2018 is also the 30th anniversary of the Italian Antarctic Research Program’s (PNRA) first marine geophysical survey in the Ross Sea in 1988 with the OGS Explora research vessel. IODP Expedition 374 is using some of these initial seismic profiles as well as those collected all the way through last year’s 11th survey, for locating drill sites. The huge amount of data collected in the Ross Sea by many Nations and favourable logistic conditions has also led to 40 years of successful international deep drilling projects in coastal areas led by the New Zealand Antarctic CRC, which employ custom-designed platforms on fast ice.

The first DSDP leg to Antarctica successfully collected cores in the Ross Sea 45 years ago in 1973, resulting in the discovery of the age of the Antarctic glaciations and the link between ice sheet volume and global sea level fluctuations. Since 1973, several Deep Sea Drilling Project (DSDP 1968-83), Ocean Drilling Program (ODP 1985-2003) and IODP (2003-current) expeditions were successfully carried out along other sectors of the Antarctic margin. Twenty years ago, ODP Expedition 178 demonstrated the crucial importance of drilling depth transects across the Antarctic margin from the continental shelf to the continental rise and also revealed the role of ice sheet volume fluctuations in governing and interacting with the global circulation during past climate changes. This was followed by successful ODP and IODP expeditions to Prydz Bay (2001) and Wilkes Land (2010) that were based on transects from the continental shelf to the abyssal plain.

IODP Expedition 374 has returned to the Ross Sea after 45 years to core below the seafloor seeking evidence of the influence of a warming ocean on ice sheet instability by investigating the past sedimentary record. IODP Expedition 374 has been very successful, with unprecedented recovery from the Antarctic continental margin, thanks to the efficient IODP organization, the professional skill of the technicians and the crew gained through 50 years of collective experience, and to the enthusiasm motivation and determination of the science party members and the science planning community, along with some much needed assistance from Mother Nature in keeping the sea ice away from the JOIDES Resolution and the waves calm!

The SCAR President Steven Chown recently stated: “The collaboration between SCAR and IODP with the support of National Antarctic Programs is an example of international best-practice coordination and optimization of logistic and human resources for addressing important scientific issues of global and societal relevance, with significant contributions also to technological development, outreach and education.”