The crucial role of ice shelves 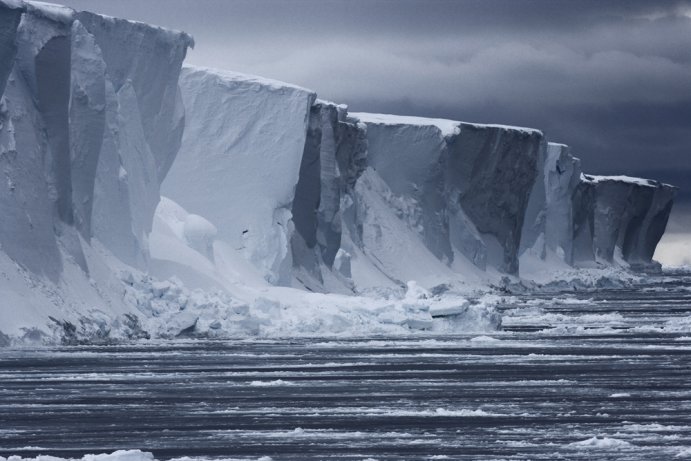 What is an ice shelf?

Ice shelves are floating tongues of ice that extend from grounded glaciers on land. The place where the ice sheets touch the ocean floor is called the grounding line. The grounding line is the border between the floating ice shelf and the land-based ice sheet.

Ice shelves surround 75% of Antarctica’s coastline and they can be up to 2000 m thick. The Ross Ice Shelf is the largest one, and is a floating piece of ice that is the size of France.

Ice shelves gain mass from ice flowing into them from glaciers on land, from snow accumulation at their surface, and from the freezing of marine ice (sea water) to their undersides.

Ice shelves lose ice by the intermittent calving (breaking off) of large icebergs and by melting from below (from relatively warm ocean currents) and from above (from warm air temperatures).

Why are ice shelves important?

Ice shelves are essential in the stability of the ice sheet because they act as buttresses. By creating friction at their bases, they hold back the glaciers that feed them and slow the flow of ice to the ocean.

Today, many ice shelves around Antarctica are thinning and shrinking. During February 2002, 3250 km2 of Larsen B ice shelf (NW of the Weddell Sea, West Antarctica) were lost by calving icebergs. It was the largest collapse of an ice shelf ever observed. You can see it here:

Long-term environmental changes can break up the equilibrium between gain and loss in the ice shelf and lead to its collapse and consequently, to the destabilization of the ice sheet.

Before collapse, ice shelves first undergo a long period of thinning. Ice shelves thin at their base when an increase of incursion of relatively warm waters (Circumpolar Deep Water) is transported to the ice shelf base by ocean currents. The increase of temperature also causes meltwater at the surface. That water percolates through the ice shelf crevasses, and because water is denser than ice, the meltwater forces it way down and acts as a wedge to push the crevasses apart far enough apart to form an iceberg. When this melt is widespread on an ice shelf, it can lead to a domino effect where many crevasses are filling with water at once and many icebergs calve very rapidly – as happened in the Larsen Ice Shelf.

When the ice shelf begins to retreat, the butressing force that used to slow the glacier flow is not sufficient anymore and the glacier speeds up on its way to the sea and its front calves rapidly. There is a positive feedback loop which increases the collapse of the ice sheet.

When icebergs melt, cold water is released into the ocean, which has a significant impact on the formation of sea ice around Antarctica during winter. It can be surprising, but an increase in the amount of sea ice during the winter can indicate the vulnerability of an ice shelf, or other important environmental changes in Antarctica.

ANDRILL core records collected a decade ago reveal that the Ross Sea Ice Shelf has already collapsed in the past, especially during the Pliocene (5-2.5 million years ago). During this time, the atmospheric CO2 concentration was close to the current level (~400ppm).

Expedition 374 aims to identify these previous ice sheet collapse events and link them to oceanic temperatures during these times with the aim to better understand how they collapsed (especially what is the threshold in oceanic temperatures which induces the collapse).