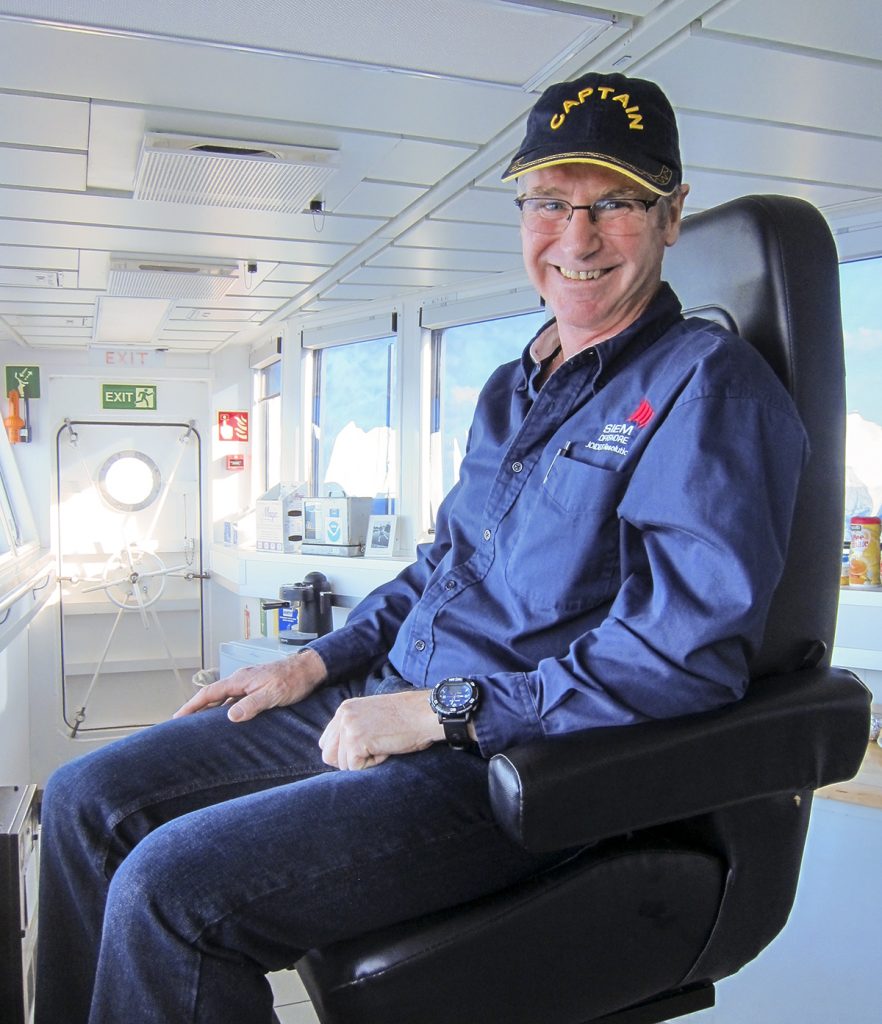 Last week, I gave you a quick tour of the JOIDES Resolution engine control room, where the ship’s functions are monitored and managed. But if the engine control room is the brain of the ship, then surely the bridge must be the brain. Another brain. The ship has two brains, like a stegosaurus.

While the engine control room manages the practicalities of power, water, fuel, and machines, the bridge manages the planning, navigation, coordination, and communication. It’s quieter too, and there’s a great view up here.

The most obvious feature of the bridge is the control panel. It takes up most of the room, covered in screens, buttons, radios, and yes, even a ship’s wheel. Though for a ship this size, the wheel looks like a videogame controller. Right now we’re holding still and drilling, so these controls aren’t needed. In fact, even while we’re moving from site to site on the open ocean, most of the steering can be run on autopilot, with only a little human supervision now and then. Generally it’s only when we’re doing the fiddly business of moving in and out of port, or near other ships or obstacles that these controls are all run manually.

Careful navigation is a pretty important part of moving a ship safely from one place to another, and the JR uses two systems for that. We have big paper nautical charts, procured before the expedition and updated by hand, and we have the ECDIS (Electronic Chart Display & Information System), which is an electronic chart that also connects to our radar and automatically identifies nearby ships in the area. It might seem a bit strange that we still use paper charts when we have the ECDIS, but they’re much bigger and easier to read and plan on, not to mention that in the case of an equipment failure or emergency they stay reliable. And they look much nicer pinned to the wall.

While we’re onsite drilling we have another problem. Since we’re dangling  a solid metal pipe down through what may be kilometres of ocean and rock, it’s vitally important that we stay PERFECTLY STATIONARY. We can’t go drifting all over the place, or we’ll bend the pipe, wreck our equipment, or worse! That means we need a way to counter the effects of wind, waves, current, and friendly humpback whales. We solve this with our Dynamic Positioning System.

Steve shows off the DPS

The DPS uses GPS satellites and acoustic beacons to figure where the ship is, and then uses positioning thrusters to hold the ship in place. While we’re on the move, the thrusters are retracted. (Before the relaunch in 2009, the front thruster poked right up in front of the bridge windows when retracted. They moved the bridge up a level to avoid that problem!)

The bridge crew do a great job of getting the JR where it needs to be and keeping it there. That means everyone else is free to focus on what they do best: the scientists on the science, the engineers on the engineering, and the education officers on the posting of whimsical photos on social media.

Are there any other parts of the JR you’re interested in learning about? Let us know!