Atlantis Bank: A Mountain Under the Sea
Big News for Educators! 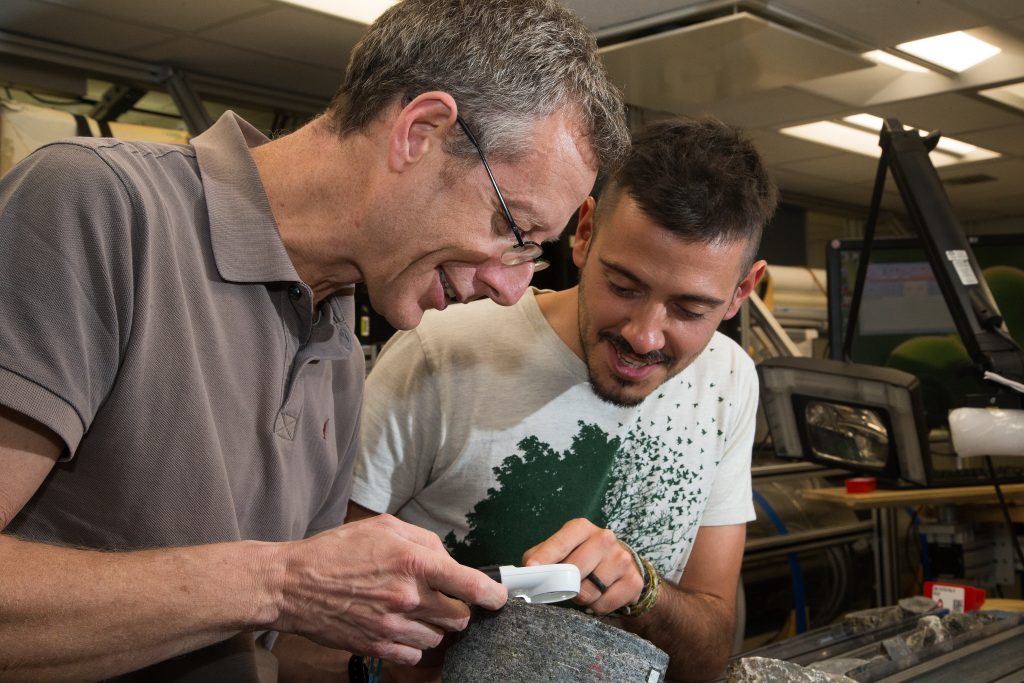 They work altogether on the same topics, alternating core observations and thin sections. Only Juergen is specialized in veins.

Ma and James explained me that their purpose is to look at the alteration of the primary minerals in order to estimate the intensity of alteration in these gabbros. Plagioclases turn into Chlorite, Pyroxenes into Amphiboles, Olivine into Clays, Serpentinites or Talc.

Toshi precised that the texture and relathionships between minerals is what can give information about the chronology of the alteration events. Actually, when a mineral cuts another, it is younger. These details are observed by microscopy.

The team is also interested in the sources of fluids that interact and alterate the rock. But macroscopic and even microscopic observations are not sufficient. They need further studies in there onshore laboratories about trace elements, isotopes… They could this way determine if alteration is due to seawater or magmatic fluids. Basically, low temperature materials result from seawater infiltration.

Juergen is the specialist of veins, that are very visible and attracting figures in these olivine-gabbro. The veins are due to fractures during the cooling of the rock and aqueous fluids can introduce the veins reacting with the rock. Otherwise, felsic veins can originate from magmatic sources on a late stage. It can be evolved melt, enriched in Quartz and Plagioclase, that crystallized in the cracks.

Even with microscopic observation and geochemical analyses, it is very difficult to distinguish felsic veins and very early water veins introducing the frozen rock.

A third model of vein, is the immiscibility model. Felsic fluids and oxides get separated and crystallized in veins.

To conclude, Riccardo explained that the main purpose of the metamorphic team is to understand the interaction between lower crust and seawater during exhumation. Actually, gabbros are deformed and altered by the migration of seawater along exhumation faults and consequent microfractures.

They can gather information about the exhumation that is a polyphase event and about the depth reached by seawater within the crust. Then, a link can exist with microbiology that studies life inside the crust …