Greetings from…somewhere in the Indian Ocean
SUMA 11 C, here we are! 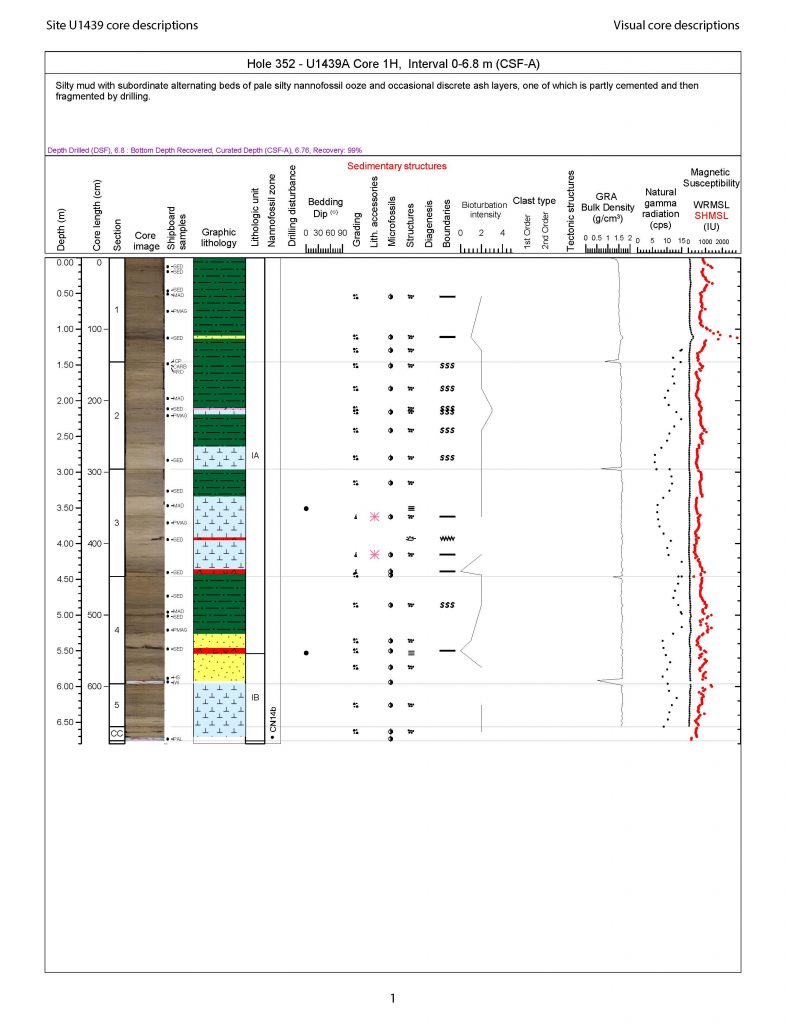 Coordinating scientific observations among 33 scientists and 24 lab technicians over 2 shifts is no easy task. But it’s very important.

When core comes on deck from the ocean floor, it undergoes many tests for magnetism, interstitial water chemistry, sediment/rock type (lithology), the speed that sound waves travel through it, etc.  Then a team of scientists observes and measures the grain size and the orientation of fractures and sedimentary layering.  Yet another group identifies different fossils.  Another group records bioturbation, the disturbance to the layering that animals caused when they were living on the seafloor when the sediments were deposited.  All these properties need to be carefully recorded so that the next shift knows what they’re looking at and future scientists can read the results even if they’re not looking at the core. 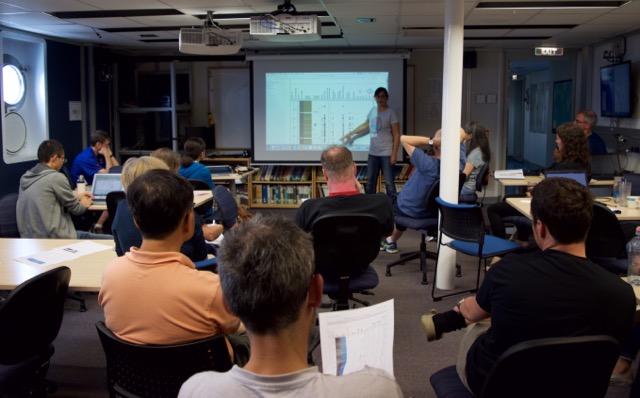 Yesterday, the science party discussed how they want to display all these observations for each section of core on a single letter-sized sheet of paper.  After an admirable consensus process, they decided on the key properties to list along the core section, which always includes a ruler along the left side that indicates depth below seafloor and distance along the core.  These descriptions become part of the initial report of scientific findings, published in the Proceedings of the International Ocean Discovery Program (IODP).  This is what the description logs will include, for every section of core:

– Age (as specific as possible based on fossil assemblages)
– Where samples have been taken from the core for further analyses
– Drilling disturbance: how much the core has been messed up by drilling is important since it influences the quality of the data
– Grading: the distribution of sediment grain size within a segment of core
– Sedimentary structures: the patterns in the sediment or sedimentary rock, such as ripple marks or criss-crossed layering (cross bedding)
– “Accessories”: a catch-all for observations of changes the sediment has undergone since it was deposited
– Trace fossils: evidence of life that’s not an imprint of an organism but the track it leaves behind, for example while crawling or burrowing
– Bioturbation intensity: how much organisms disturbed the sediment when it was fresh and squishy
– Tectonic structures: faults, fractures, folds—any deformation of the sediment that might have been caused by physical forces on the sediment (i.e. stress)
– Strength: how much stress the sediment or rock can withhold before it breaks or deforms
– Physical Properties: a category that includes how fast sound waves travel through the core, the bulk density of the core, the moisture of the sediment/rock, etc., which correlates directly with the type of sediment or rock the core is made of

The teaser images shows an example from a previous expedition of what a core description log could like.  Each expedition decides based on the scientific priorities and what the scientists expect to find.  They can always change it when surprises come out of the seafloor!