Greetings from…somewhere in the Indian Ocean 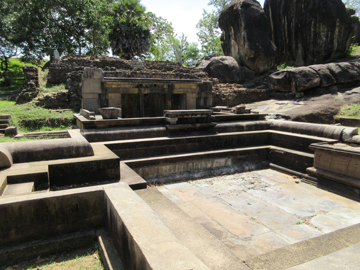 Welp, here we are, somewhere between Sri Lanka and our next destination, designated SUMA-11C for now, the first site at which we’ll try to persuade the seafloor to give us some of its mud.  We’ve traded the frenetic congestion of Colombo for the complete isolation of the open ocean, although rumor has it some flying fish were spotted earlier, so I guess we’re not altogether alone out here.

Personally, while I liked traveling around Sri Lanka for a few days prior to departing, I’m glad to have the crew, other scientists, and flying fish for company now.  Sri Lanka is a busy place and seems full of contradiction.  While one foot is clearly rooted in the past with millennium-old ruins rising in grassy parks, newlyweds having their pictures taken nearby, the other is reaching hard for the future.  And it’s a future of glassy high rises and five-star hotels, a new culture that strives to be global, and so feels placeless.  I was worn out by the 30 hour trip from San Diego, but when I collapsed in my hotel bed, I hardly felt as though I’d moved.  A nice green apple was placed out on a plate for me.  It’s odd to travel so far and reach such a fun place as Sri Lanka only to be greeted with a room that could have been transported there from the US right along with you.

I got a bit antsy sitting in my comfortable familiarity, and since I’d arrived early for our August 7 departure, I took a train inland — an experience in itself — to try to find at least a bit of the country underlying the newly molded splendor.  It didn’t take long before vendors hopped on the train, chanting the Sinhalese names of what they were selling.  During the 5 hour ride on a seat that felt like it was carved from wood, I felt I was encountering more of what I’d hoped to find.  I made a loop through Anuradhapura, Sigiriya, and Dambulla.  The only reason I remember those names is from having to repeat them to the Tuk Tuk drivers who wanted to take me just about anywhere except where I wanted to go in their three-wheeled rickshaws.  I made the mistake once of replying to the driver that yes, I liked spices.  He said something back to me that was lost in the wind as we sped along, passing trucks so tightly I could reach out and touch them.  I agreed, and the next thing I knew, he’d made a u-turn in the face of oncoming traffic and pulled over at a spice garden where someone insisted on rubbing some pureed avocado on my arm and then tried to convince me that ground ginger paste makes a perfectly natural hair-removal cream.  I don’t think it was ground ginger in the bottle, but whatever it was the bald patch on my leg is a testament to its efficacy.

The ruins of Anuradhapura and Sigiriya were delightful as were the thousand-year-old frescoes in a cave in an alcove of the Lion’s Rock in Sigiriya.  So many layers of cultural overlapped in those places — capitals were built only to fall into disrepair or be raided and later rebuilt.  Prefectories were reoccupied after centuries of disuse.  One room in the Dambulla cave temple is newly decorated with gold leaf and a plaster statue of the Buddha while the others contain the original sculpture and painting, sheltered for centuries in their alcoves.  So maybe the hyper-modern is just the next layer of history to be stretched out over the island.

In any case, in true Sri Lankan fashion, we found ourselves stuck in the Colombo port with the JOIDES parked in as a huge container ship was loaded.  After traveling inland to see the historical side of Sri Lanka, I had come back to Colombo and wandered through the sheer chaos of Pettah market, where people try to sell wallets with the apple logo branded on them, Tuk Tuk’s plow along, horns blaring to clear pedestrians out of the way, and legs of pork hang from vendor’s stalls.  I’ll miss Sri Lanka and the time it gave me away from the concerns of being a student and publishing papers and worries about my scientific future.  But there was no better sendoff, no more fitting way to leave, than by having to negotiate our way out of one final traffic jam.

It’s almost 11:00 pm ship time, so I’ll wrap up this post.  My shift will end in an hour, but I don’t think I can wait that long for “dinner” — it’s time to sneak down to the galley and avail myself of the 24 hour ice cream machine…or the stock of cake…or both now that the sea sickness has abated.  And I promise, next time I’ll say more about the science since that is, after all, why we’re out here somewhere in the Indian Ocean, gliding past who knows what kinds of marine life in the dark.

And I promise, photos of Sri Lanka are forthcoming…as soon as I figure out how to get them onto my computer.