How do we know our samples are clean?
The Puzzle of Tectonic Plates 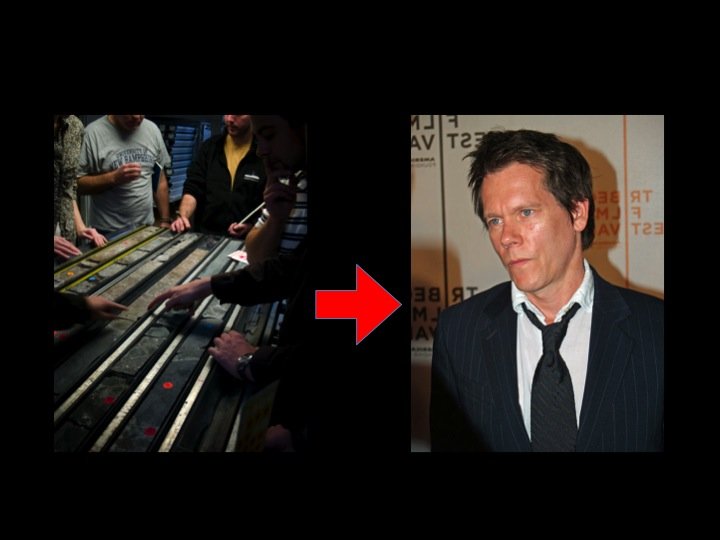 What the scientists are doing on the JOIDES Resolution right now may seem like a small, isolated event (particularly since we are out in the middle of the ocean where no one, except the bird that keeps hanging around here, can see us), and yet the work they are doing here will have rippling effects that spread around the world. The layers that surround them are so many that I can play Six Degrees of Kevin Bacon and connect core description to Kevin Bacon in six degrees.

Degree 1: Core description
The scientists onboard are describing all the cores of rock and sediment from these seamount drill sites.

Degree 2: Expedition science objectives
The data from the core description will be used by our two co-chief scientists, Anthony and Toshi, to try to answer the question of whether or not the hotspot that created these seamounts is moving within the mantle, which would challenge prior thinking. If the data collected is conclusive, then not only would textbooks need to be changed, but it may help other scientists who study the interior of the Earth find answers to the many questions we have or begin researching new questions.

Degree 3: Research objectives of the individual science team members
The co-chiefs chose scientists from all over the world to be part of this expedition’s science team. The scientists were interested because their own research could make use of the data and samples that are collected from these seamount cores. Part of the deal the scientists make is that, in exchange for two months of nonstop servitude on the ship doing core description, they all have one year to use the data and samples before any other scientists can look at them. Since the twenty-seven other scientists’ research extends to a far broader range of topics than just hotspots, the samples collected can result in many other potentially significant discoveries in the next two years.

Degree 4: IODP repository and the international science community
Part of the reason core description is being done while we are still at sea is because it allows all the scientists onboard to identify the samples and data that will be most useful to their research. The other big reason is they are also basically creating a catalog of the cores that other scientists can shop from. Each core is cut in half, and one half is worked on the ship while the other half is saved to go to one of the IODP’s three core repositories (ours will be going to the repository at Texas A&M). Once the one-year moratorium is over, scientists around the world can check the catalog, find the cores and/or data that fit their research and request to use them. Scientists not involved in the actual expedition may then be able to benefit from it to produce their own significant findings.

Degree 5: The world gets smarter
Between the main science research objectives of the expedition, the 27 science team scientists’ research and all the other scientists on the planet who may make use of the Louisville Seamount Trail data and samples in their research, there is a good chance that this expedition will increase humanity’s knowledge of how the earth works. Scientific research ocean drilling has already hit more than a few home runs in that regard, including everything from some of the first conclusive evidence that seafloor spreading was actually happening, to evidence of why various mass extinctions have occurred throughout Earth’s history to data on how climate has changed over Earth’s history.

Degree 6: Footloose is voted greatest movie of all time
The increase in knowledge results in the Kevin Bacon movie Footloose being chosen the greatest movie of all time, since any movie that introduced “dancing angry” to our lives, or that shows how once you give high school kids who have never been allowed to dance before a prom in a barn, they instantaneously turn into professional dancers, is obviously of the highest quality.

So maybe the last degree is a stretch in more than one way, but hopefully because of it, you read the entire blog and now have a better sense of the broader impacts of the scientific work happening right now on a boat in the middle of nowhere.