The Puzzle of Tectonic Plates 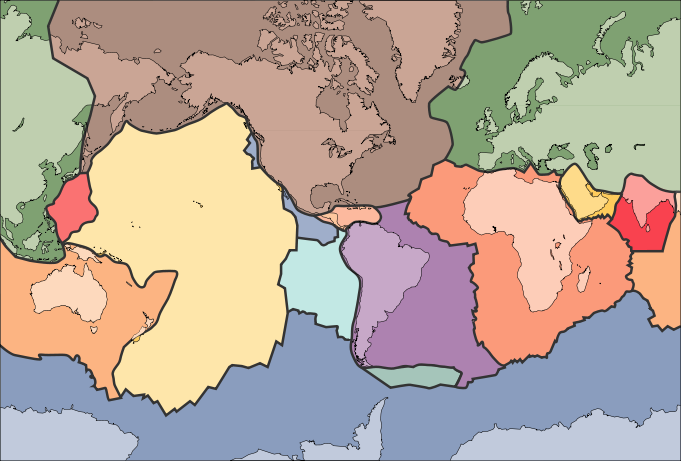 To understand the science of our expedition, students need to know that the Pacific Ocean plate is moving over a hotspot to create the Louisville Seamount Trail. This may be hard for students new to the concept to understand, particularly since most of them probably associate the word “plate” with dinner accessories. Below are some interactive activities that can help students understand tectonic plates.

I think it is good to begin by defining a plate to students. A basic, introductory definition is they are huge pieces of the Earth’s lithosphere that slowly move over time. This might be a hard idea for students to believe (as it was for most geologists when they first heard it), so a good activity to begin with is “Continental Drift Hypothesis: Pangaea Revisited” from Leslie Sautter”s Plate Tectonics curriculum. Students can see some of the evidence scientists initially used to support the continental drift hypothesis that eventually led to plate tectonics theory. The activity provides cut-outs of the continents and also shows where different continents have the same fossils and mountains, that students can fit together like a puzzle to recreate Pangaea.

The students will notice the continents are not exact fits, though, which leads to this second “Plate Tectonics” activity from the New Zealand education website TKI. This activity shows where the boundaries of the plates currently can be found and how the plates extend into and include the ocean floor. At the bottom of the page in the “Activity Resources” a “Plate tectonics jigsaw puzzle” pdf can be found. These can be printed for the students (I would suggest on cardstock), cut into pieces, and then by putting together the puzzle, they can learn about the size, shape and number of tectonic plates on Earth.

The map activities are flat, but the earth is round. To help students visualize how the plates look on the Earth, Cheryl Hammons, a 2009 School of Rock alum, places a children’s large-piece puzzle on top of a globe, tapes it to the back of the globe, and then bends and moves the pieces so students can visualize how that works. This gave me an idea, which I cannot test since there is not a department store near this seamount we are drilling on, not to mention any kids to try it out with, but here it is anyways. Give students a small, plastic ball, and then have them tape the plate tectonics jigsaw puzzle pieces from the New Zealand website onto the ball to create a tectonics plates globe similar to the one we live on. Choosing the correctly sized ball is the tricky part that I cannot help you with right now.

Dudley Friskopp another 2009 School of Rock alum (Full disclosure: I am a 2009 School of Rock alum. That is why I know about the alumni awesomeness) has a long-term activity he uses with students to help them see some more of the evidence as to why the plate boundaries are positioned where they are. Each year he purchases a Mercator world map from National Geographic that shows ocean floor features, as well as the usual continental landforms, and displays it on a large bulletin board. This particular map is key to the success of the activity because it centers on the Pacific Basin and not the Atlantic like most wall maps, and thus works great to show the Pacific Ring of Fire. Each week one student goes to this USGS earthquake website and prints off the data table of world earthquakes from the past seven days with magnitude 5 and above. Using latitude and longitude, the students stick color-coded pins in the map for each quake on the data table (typically it’s between 20 to 30 pins each week). Dudley has them use colored dressmakers pins (the ones with large plastic heads) and has them follow a magnitude-color coding system he created where a white-headed pin represents a magnitude 5 to 5.9 quake, yellow represents 6 to 6.9, etc. (You’ll need a bunch of pins for the 5-5.9 quakes. You can make more by dipping the unused colored pins in white latex paint.) Using current data over the course of a few months, a colorful array of pins produce a really cool outline of plate boundaries that the students created.