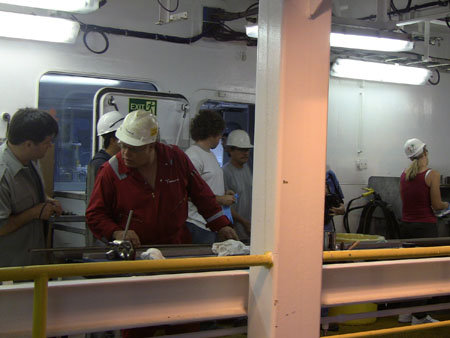 Talk about exciting! The first core of hole U1365 was brought up on deck at 6:30 a.m. about 7 hours later than originally expected, but that is what happens in real science. Many of the scientists and other crew members were out on the deck bright and early to view the activites. The core was quickly measured into 1.5 m lengths, cut, capped, and labeled. It was then brought inside and placed in a large refrigerator to reach equilibrium before work can begin.  An initial quick observation showed the sediments to be very wet and were a light chocolate color. In the meantime, we are waiting for the next section of core to be brought up, which will be several hours.

Weather wise, the sea is calm, the sky is filled with small cumulus clouds, and the temperature is warm.

core on deck
17
Oct 2010
By Joe MonacoUncategorizedLeave a comment