Core on the Floor? 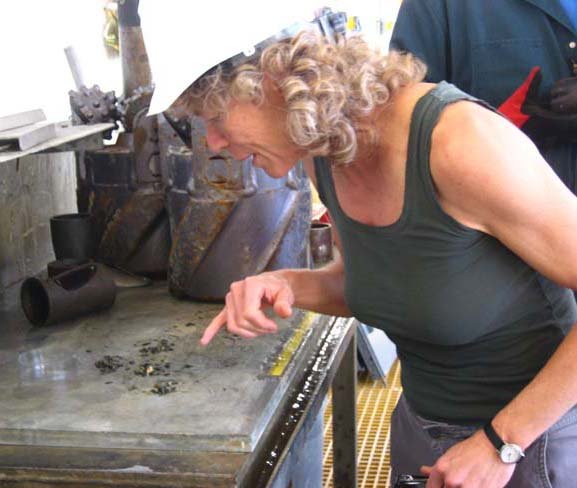 “Core on the Floor”

I didn’t think I would hear those words this expedition, but it happened.  When we first arrived near Hole U1309D and sent the camera down for reentry, the first attempt to reenter the hole was actually at a depression that looked like it might be a cone that had been covered by seven years of deposition. It turned out to be a very curious object that had nothing to do with the drill hole. We later moved over a few meters and found the real reentry cone and went about logging the borehole. The original object was not forgotten and there was speculation as to what it could be. In the end we had a little extra time after getting all of the logging information we could and we returned to the object that had taken on the name “decoy hole.”

The chief scientists felt that getting a piece of the object would be of some interest. A plan was drawn up to collect a sample from the “decoy hole.” On the afternoon of our last day on site the plan came to fruition.  The scientists gathered in the office and watched the monitor as the camera searched for the decoy hole and finally grabbed a sample. Everyone rushed to the core deck to see how much of a sample we had collected and what it looked like. The sample was very small but interesting.

There were some small green pieces that looked like they could be some of the fault rock. Some white particles that looked like carbonates and some platy black particles that I have no idea what they are. The identification will be left to the experts. To me it was a thrill just to be one of the first to see rocks that had just been collected from the ocean floor 1650 meters below.