Just the Right Amount of Time

Core on the Floor?
Abby on Protected Species Watch 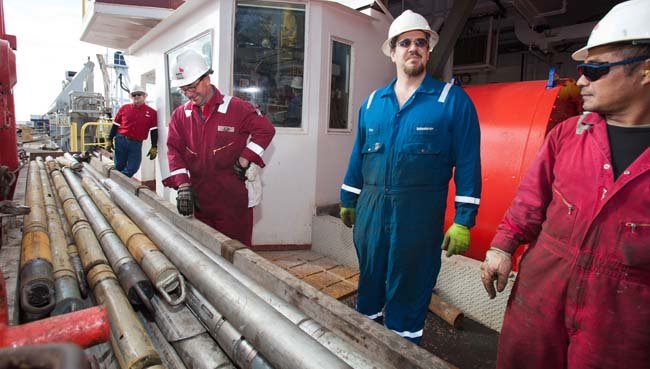 We arrived on site nearly three days early. Hopes were high that we would be able to get all of the logging data in the first three days, leaving some extra time to do even more scientific work. Those hopes were whittled away bit by bit as one problem after another arose.

Immediately after we arrived on site the drilling crew started to trip pipe. The iron roughneck was down and the drill string assembly was a little slower with human power replacing mechanical power. Eventually the iron rough neck was repaired and we were through our first glitch.

The Triple Combo was deployed. It looked like it was going to be a good run. The temperature data was coming in and the data looked fine. Then slowdown number two started when the Triple Combo logging tool got stuck in the pipe. Unable to bring it up through the pipe, a crimping tool was sent down to lodge the Triple Combo in the pipe so that it could come up secure inside the pipe. The first crimper did not seem to clamp onto the tool so another one was deployed. Nearly a day was lost but no problem, we had arrived early and had time to spare. In spite of the problems the temperature logging was successful in getting the necessary data.

Because of the problems with the temperature tool, it was thought that by lowering pipe to about 700 meters into the hole, the sonic tool would avoid the abrasive sides of the hole and still get the information from the lower part of the hole. Unfortunately the sonic tool got stuck in the pipe and would not leave it. It had to be pulled up and another tool was deployed losing a little more time.

Meanwhile logging continued during the daylight hours with the Versatile Seismic Imager (VSI). After two days, the VSI data was complete.

On the last day, Magnetic Susceptibility Sonde was deployed and it did just what it was supposed to do. After all of the logging was complete, the camera was sent down for a bottom survey. After a brief spiral survey the camera located a mound that was of interest near Hole U1309D that had been previously imaged.  A sample was recovered with the core catcher and the site was officially designated U1392.

Before leaving the site, a magnetometer survey was completed. In the end all of the necessary data was collected and we were able to leave for San Juan, Puerto Rico on time. It was nice to be able to have time to work through the delays. Without the extra time on site this story could have had a different ending.