Coring can be Boring! Geologically Speaking… 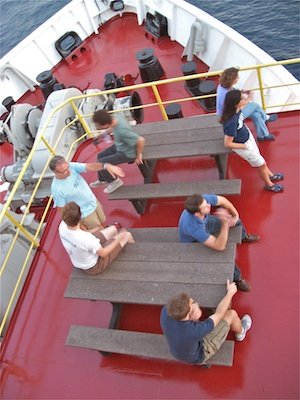 Where are we now? Off the western coast of Costa Rica, in the Pacific Ocean. Our coordinates are N 8°36 min, W 84°4 min. Clouds around again, but didn’t make a very good sunset today. Very choppy water, no noticeable swell. Air temperature is 27 °C (80 °F) and the water temperature is 33 °C (hot springs warm!).  A shark was spotted near the stern of the ship this afternoon, and plenty of dolphins around.

Scientists at Work
The plan is to do one more Triple Combo Logging run, an FMS (Formation MicroScanner Sonde, picture below right) Sonic Tool String run, and a UBI tool run down the borehole before we fill in the hole and leave for the next site. The FMS Sonic String has four imaging pads

Life on Board
Besides the Education Officer (that’s me!), we have one more person onboard that records and helps explain to the public what the scientists are doing on the JOIDES Resolution: Videographer Thanos Fatouros.  With his work, Thanos wants to emphasize the connection between science and the arts. He heard about the position aboard the JR and proposed projects emphasizing graphics, illustration, and animation as a way to help describe the science behind the story in ways that people can understand.  Before coming to the JR, Thanos worked in documentary film then went on to work in cinema and arts installations in Greece and other countries in Europe.  He will also be working with me to make several short videos for children addressing the purpose and workings of the coring projects aboard the JR.

You never can tell what geologists are talking about when they don’t have any cores to examine. One of these geologists probably just asked the others, “Hey, what did the drill bit say to the accretionary plate?…It’s been nice gnawing you!”

From the subduction zone, near the Isla del Canos…