What a Difference a Day Makes!
Ship Shape and in Bristol Fashion! 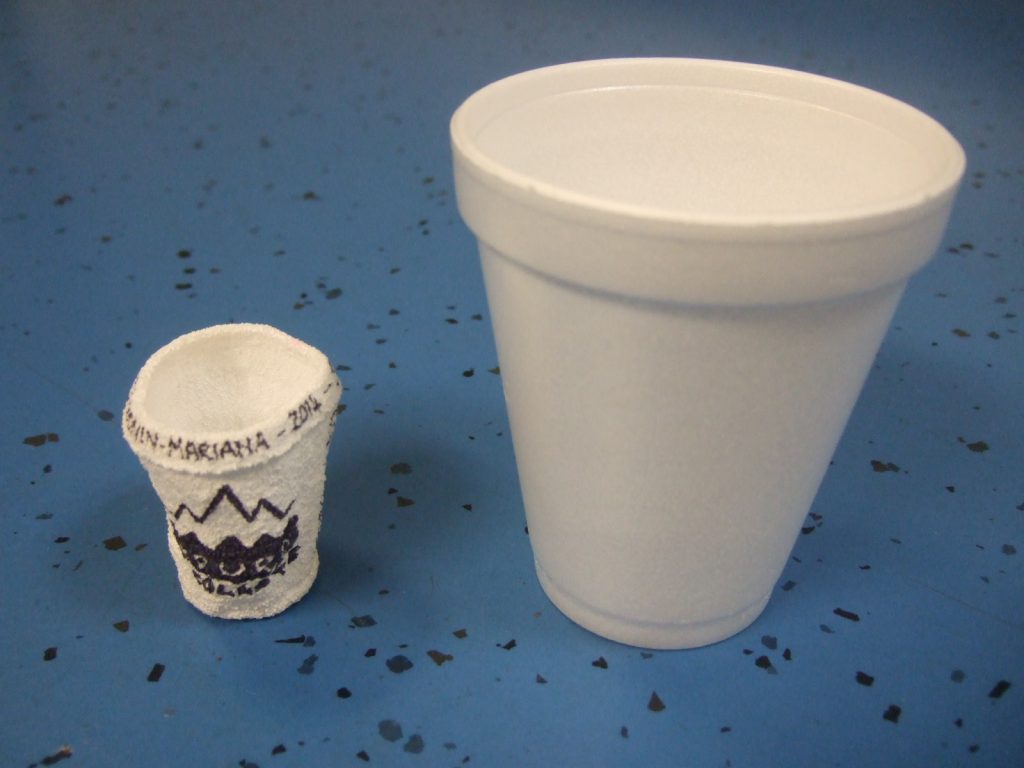 After all the excitement of the ‘core on deck’ over the last 24 hours we are now on the move again. The drilling we did was an exploratory core for another expedition still in the planning stage. No sooner was everyone up and running in the labs than the cores stopped coming and before we knew it all the drill pipe was back on deck, the thrusters retracted and the ship speeding off into the blue yonder again! We are now moving back in a south-westerly direction where we will settle down for some seriously deep drilling – the main purpose of Expedition 350. This means that laboratory explanations will have to wait because there is something far more important to do before we arrive at our new destination.

Everyone is now frantically colouring in polystyrene cups with waterproof pens. Yes, if you were on board now you would see lots of people with high-level qualifications in science decorating cups with all manner of patterns and pictures, and with rather a lot of competition between each other too! As it happens, geologists are rather good at colouring in, which is lucky. It is a vital skill for field geology. Can you imagine trying to represent many different rock types just with a normal sketching pencil? Hatching, stippling and shading can only be taken so far before you just end up with a large unidentifiable grey smudge – most of which appears to have transferred itself to your hand and your expensive new fleece – well, pale blue or pink always seems like a good idea at the time – geologists generally grow out of it and into grey, black and khaki – except for their coloured pens and pencils of course!

All geological maps use colour to show different rock units, and so all geology students have to learn how to colour maps, even strapping 6’6’’ rugby-playing mining geology students who think it is a bit ‘sissy’ to have colouring pencils in their back-packs! But they soon learn that this is no ordinary colouring – oh no! This is an extreme sport – extreme colouring while abseiling down a mountain or balancing on a cliff-top! My own experience of extreme colouring was slightly less exciting, in Scotland up on the exposed West Coast of the Mull of Kintire, with the intermittent horizontal rain interspersed with thick fog that hid the sheep huddled a mere 10 yards in front of me muttering to each other through the mist. I was up to my ankles in moorland mud, cold, tired and expected to shade carefully between the lines – and I still didn’t give up! Geology is truly a labour of love or of complete madness, depending on your frame of reference!

Anyway, back to geological drilling and the polystyrene cup link! It is very dark under the water. The ‘photic zone’ – where light can penetrate – only extends to about 200m down in the clearest of waters, so the only way to see what is going on at the bottom of the sea is to send down a frame with camera and lights, sending pictures back up to the ship. The decorated polystyrene cups are collected in a net bag and strapped to the camera frame for a journey all the way down to the seabed and back up again.

So are they going just for the ride? No, they are for illustrating the pressure that is found deep beneath the surface of the ocean, and the colouring is a therapy to prevent people going mad from just looking at mud, rocks and fossils for 12 hours a day. The pressure of the sea (weight) pushing down increases dramatically as you sink through the ocean. The weight pressing down on you from the atmosphere (air) at the surface is 1 Bar. For every 10 metres you sink through the water the pressure increases by another Bar. This time we are drilling down to 2100 metres so the pressure will be 210 times what it is at the surface! If you were to go down unprotected your eardrums would burst and your lungs would collapse, amongst other things! Everything that goes deep down is likely to be crushed. When the polystyrene cups come back up they have been reduced to a fraction of their size (see photo), but with the decorations still beautifully in proportion to illustrate how the pressure pushes in from all directions, not just from above. They are also a nice souvenier to bring back home from the expedition!