Dancing with Icebergs: The Re-Entry Cone

Ancient Icebergs and Polar Oceans
Life on the JR: We still have pineapples! 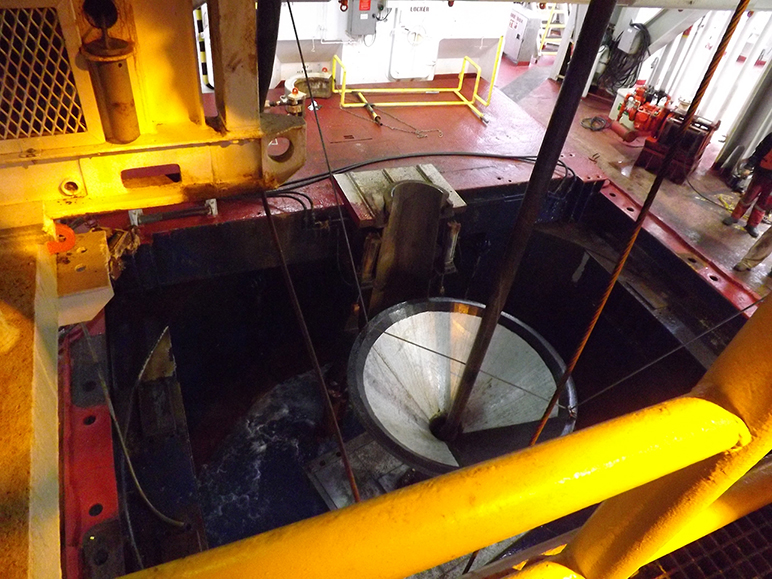 Due to the unexpected erratic movements of icebergs, we have had to pull the drill bit up in the hole or even out of it above the seafloor many times in the past week. The ship is unable to move with the drill pipe stuck in the seafloor and it takes time dismantling the stands of pipe so that it is short enough to hang free above the seafloor. Only when the pipe is hanging free, the ship can move. Therefore, if an iceberg comes within a mile of the ship it is closely monitored and a set of safety measures take effect, which include raising the drill string out of the hole. Typically, if there is enough time and the iceberg keeps approaching slowly, a large approximately 3-m (10-ft steel) funnel is lowered over the drill pipe to the seafloor. Unfortunately, icebergs have been coming at us at higher speed than expected and with unpredictable paths, so we have not been able to deploy a free-fall funnel. Finding back the drill hole without a free-fall funnel after leaving the location is very difficult, and if it takes too long, the hole will cave in. 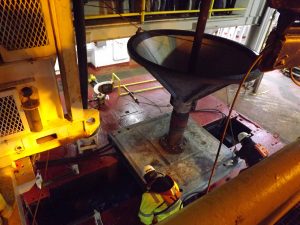 Rest assured: engineers here on board can fix EVERYTHING (I am not exaggerating). So, the crew got to work to build a re-entry platform, so that we can find the hole more easily and make it more stable so we can move the drillstring in and out if we need to move the ship for icebergs. It took some time to put the re-entry platform together, but it was launched a few hours ago. The re-entry system consists of a free-fall funnel attached to a platform with an 11-m long pipe that is large enough to fit the drill string. The platform serves as a mud skirt, making sure the funnel doesn’t sink too far into the fluffy sediment at the top of the seafloor.

The moonpool is a hole in the middle of the ship through which the drill string passes. To launch the re-entry system, the doors of the moonpool had to be opened wide for the platform to pass through. This was a tricky operation, because we are also currently operating in high waves, but Bubba, the toolpusher, and his crew are very experienced. The spectacle of launching the re-entry cone was watched by many science party members. Everyone was freezing, but it was worth it (The drill crew who are out there everyday in the wind and snow deserve a lot of respect). After the launch it took the funnel and platform about 17 minutes to get to the bottom of the ocean, sliding down along the drillpipe for about 4 km. The funnel has a white interior, like a target, so that it is easy to find if a re-entry is needed. Now fingers crossed and let’s hope it works!