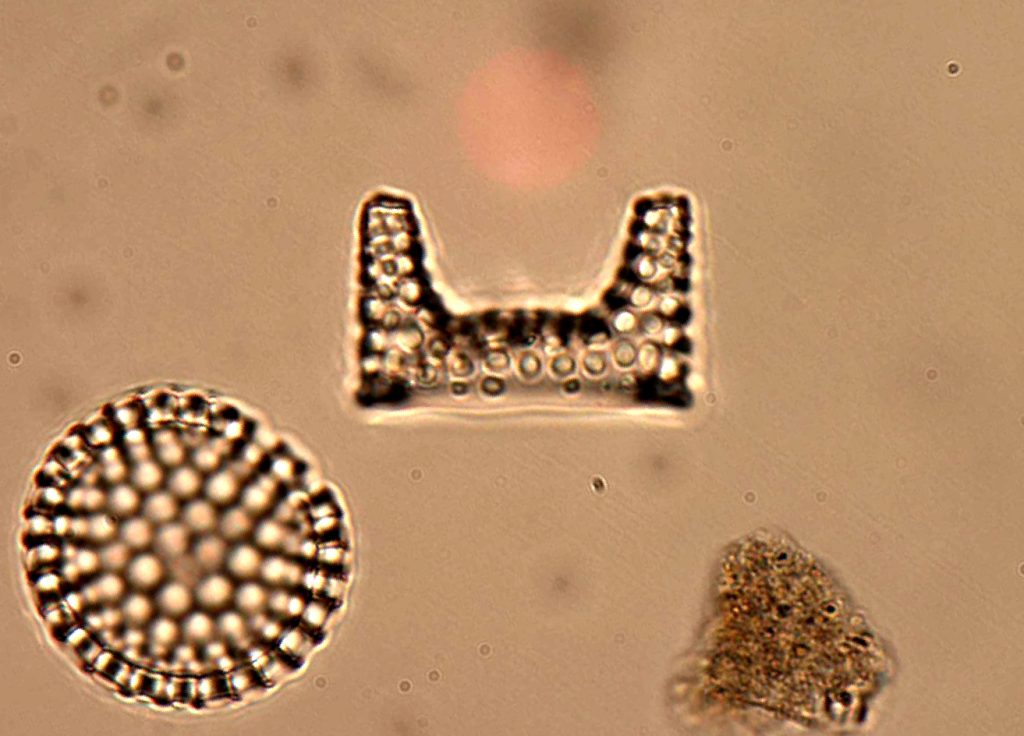 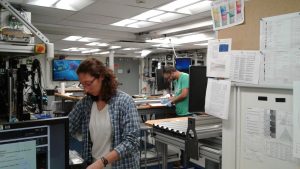 The team I am part of on board the Joides Resolution, is the Sedimentology team. We have several jobs: one is to X-ray the core sections that come up to see if something interesting is embedded inside. Once the X-rays look good, the cores are split into half sections across the length of the core and we describe the mud and layering we see. We also take smearslides and look at minerals and microfossils. The shipboard lab has special tables to lay out the half core sections so that we can see the layering inside and any disturbance of the layering caused by drilling. The Sedimentology team also uses instrument tracks to take full-length digital images of the sections, and to measure their color and magnetic properties. The photo above shows my fellow night shift sedimentologists, Benny Reinardy and Ruthie Halberstadt, at work in the sedimentology lab. 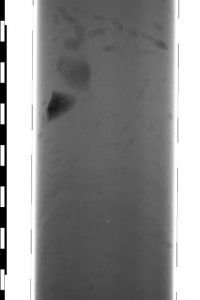 ent icebergs as they melted. Icebergs are made of pieces of land ice that have broken off glaciers in the ocean. Even though these icebergs may have melted millions of years ago, the rocks and minerals are the scientific evidence of the iceberg’s existence in the past and can be used to trace the paths of icebergs in the ocean currents. The rocks dropped from icebergs (ice-rafted debris or IRD) in the layers we describe provide us with one way to gain knowledge about the past environment and climate in the Amundsen Sea. Some layers contain ice-rafted debris and some don’t. The X-ray image shows a picture of density changes. Rocks “floating” in the mud are hard and dense and they show up as dark blobs, whereas the mud around it is soft and less dense. The X-rays travel through the soft mud, but not as well as through the dense rocks. It is the same when you take an X-ray of an arm or leg with a broken bone: the bone is denser than the tissue and the X-rays make it visible. 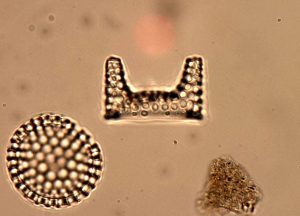 We also keep track of evidence of ancient life embedded in the layers. The food chain in the Antarctic Ocean is quite special. We have seen humpback whales around the ship, which feed on krill. In turn the krill feed on microscopic plants called diatoms. Even today diatoms are at the bottom of the food chain here in the Southern Ocean. Depending on the environmental and climate conditions in the past diatoms were blooming here in the Amundsen Sea or not. Also, different types of diatoms do well in different environments. We found the type of fossil diatom above in several of our smear slides samples from the core. Its name is Eucampia antarctica, it looks like a fancy letter “C” and it likes cold polar ocean environments. However, other diatoms don’t like to live in the cold at all and the paleontologists have found fossils of these types of diatoms as well.