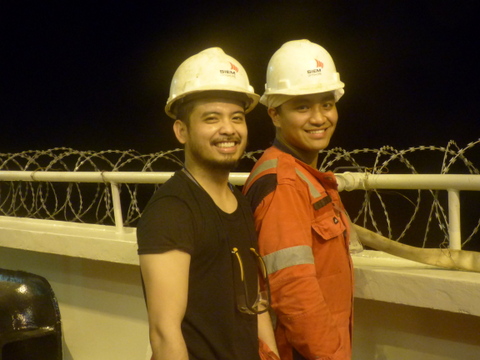 Imagine living in your house if you never did any maintenance.  Just walking around would eventually become hazardous as things start to fall apart around you.  Ships are like houses on high-speed time lapse.  Rust sprouts as fast as weeds, and decks get encrusted with sediment, salt and grease on a daily basis.  Items both big and small can get rearranged or loosened in heavy seas and high winds.  Other times items need to get moved purposefully from one area to another.  The deck crew deals with all of this and more, supporting both bridge and rig floor as well.

The deck hands never have a moment of down time, no matter how long the ship is transiting rather than drilling.  At 470′ (143m), before the paint is dry on one rail, another needs its rust removed and painting done.  The deck hands help the rig workers when pipe is tripped (raised from or lowered to the sea floor), and they act as lookouts for the bridge for part of their shift.  But no matter how busy they are kept, to the last they love their job.  Just as with every other crew department (as I’ve noted in previous entries), every one of them always smiles, waves and greets me whenever I see them in passing, even now that we’ve been out to sea over 6 weeks.  Imagine how happy you would be in life if everyone always smiled and greeted you cheerfully every day.  No wonder they all look about half their actual ages on this ship!