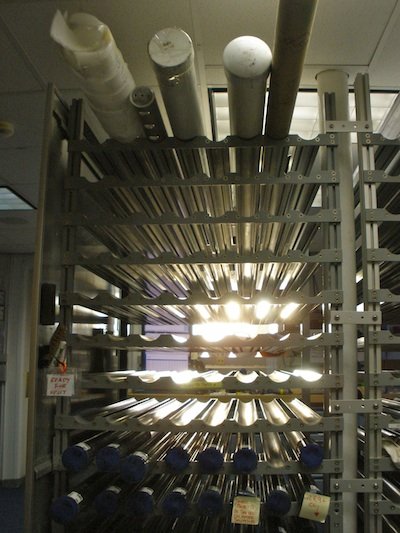 Where are we now?
Off the western coast of Costa Rica, in the Pacific Ocean. Our coordinates are still N 8°36 min, W 84°4 min as we continue coring operations at this site. Water smooth and temperature is still 27 °C. Air at 29 °C, but huge thunderheads and rain all around. In the map below, you can see the ocean floor plate boundaries and our position on the edge of the upper Caribbean plate.

Besides helping take samples, label and bag, one of the things I do on my 2 hour shift at the sampling table is what I call “tag maintenance.”  Each scientist or group that has requested samples of the core has a set of tags with their name on it, and sometimes an amount, like 10 cubic centimeters (cc). These name tags are taped to a toothpick that is stuck into the core working half at the spot they have requested – except with the current deep hard rock part of the core, where we just have to lay the tag on the rock itself.

Some scientists request things like “One per core” while others may want a cylindrical 10 cc sample every 20 cm.  If the core is softer sediment, then it is fairly easy to scoop or cut out a sample; if it is hard rock, we use a cylindrical attachment on the power saw.  We have little cylinder-shaped Styrofoam pieces to fill in the holes left in the core. After a few uses in the rock and mud, the name tags get pretty dirty, or the tag no longer sticks to the toothpick. So, I put the tags in alphabetical order by last name of the scientist and also retape or rewrite any damaged tags. With so many scientists, samples, and mud, organization is very important!

Every core that comes in is first inscribed in the Laser Chamber, then sent to the cutting room where it is washed then split with a saw.

After splitting the long way, each long half is lightly sprayed with water and cleaned up, then it is stored in a rack to await sampling and processing.

Now that we have finished coring at this site, we will continue to get information about the plate boundary here using a technique called “downhole logging” or “wireline logging.” The word “logging” in science means “making a record of.”  Scientists place measuring tools in a long, specially constructed pipe at the end of a cable and the rig floor team lowers them down into the same hole that we drilled to collect the core. The cable allows scientists to collect measurements as the tools are being lowered through the hole, about 800 meters – that’s almost a half a mile!

The tools attached to the cable take measurements like how fast sound travels through the surrounding soil or rock, how dense it is, the temperature, and how porous and permeable it is so the amount of water in the soil or rock can be estimated.  This device is called the Triple Combo Ultrasonic Borehole Imager, or TC UBI, and it also measures hole diameter, natural gamma radiation, electrical resistance, and takes ultrasound images.  All of this information is communicated to the ship through the cable so scientists on-board can “see” the information as the TC UBI is traveling down through the sediments.

Life on Board
About 6:00 am this morning, the captain announced over the speakers that there was a waterspout of the port side of the ship.  From my cabin downstairs, I put on my shoes, grabbed my camera, and ran up the stairs to the Forecastle Deck, or Focsle, as they say it, and out to the railing. In just those few minutes, the water spout had retreated somewhat back up into the cloud. Another one was forming near that one, but it never touched down. This kind of formation indicates unstable air masses.

A kite contest was announced, but they haven’t yet set a date.  Kites must be constructed using materials found on the ship.  They will have several categories like longest flight, highest flight, best looking kite, etc.  Stay tuned.

Kudos once again to our wonderful kitchen staff for the incredible meals they prepare!

From Rainbow Sunset/Waterspout Central above the subduction zone…