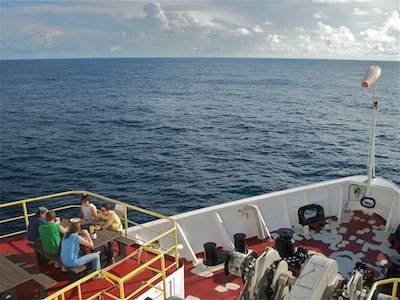 Where are we now?
Off the western coast of Costa Rica, in the Pacific Ocean. Our coordinates are N 8°36 min, W 84°4 min. Beautiful day with nice clouds all around on the horizon, and early this morning the smoothest, bluest ocean water I have ever seen. The swell is more noticeable today…could be up to a whopping five feet or so. Air temperature is 28 °C (82 °F) and the water temperature is 33 °C (bathtub warm!).

Scientists at Work
The Downhole Logging apparatus (TC UBI) apparently ran into an obstruction at about 470 meters below seafloor and they were going to pull it back up and try to lower the drill pipe to clear the blockage.  But they found that the casing had worked its way down to 450 mbsf, so now they are going to go back down and try to clear the way with the drill bit all the way down to 800 mbsf. If the hole stays open and if they have time, tonight they will put down a new tool string combination that includes the UBI.

Now that the scientists have mostly completed their initial core description (in the deeper cores, a “monotonous sequence of dark greenish gray clayey siltstone“ with rare foraminifera) and sampling, they are busy working with the data that they have collected so far.

Rachel Gray is a Chemistry Technician, and she works for IODP (Integrated Ocean Drilling Program) at Texas A&M. She got both her B.S. and her M.S. degrees from Ohio State in Geology. This is her second expedition on the JR.

One of the things she is doing in the Chemistry and Microbiology Lab is freeze drying samples from the sediment cores and then pulverizing them into dust. This dust can then be analyzed for many elements like carbon (both organic and inorganic), lithium, boron, and silicon.

She also gets to use an incredible balance (above), called a Cahn balance, made specifically for shipboard measurements.  It has a counter-balance underneath it that swings with the ship’s rocking so that the actual balance stays level with the world, even though it looks like it is swinging. It is hooked to a computer and takes 200 measurements per minute then averages them to tell you the best mass.

Physician Gene Molina started out as an emergency room doctor, but had always wanted to work on a ship.  He got his wish and worked on fancy cruise ships for awhile (and he could take his wife along!), but he was really interested in scientific research and the places scientists go to learn about how the world works.

He has been on twelve expeditions with the JR, and, because of the schedule, he still gets to spend time with his family. He has four children, three girls and one boy, with the younger two still living at home and going to college.  The older two have children of their own, so Gene also has five grandchildren!

From the Bridge Deck, I got a nice photo of the derrick working away mid-ship raising up and lowering pipes.  I turned around and in the window of the Bridge, I got a somewhat distorted image of the derrick.

From the subduction zone, west of Costa Rica…