Eating on the JOIDES Resolution

Labeling is Important
Eating – My Favorite Time of the Day! 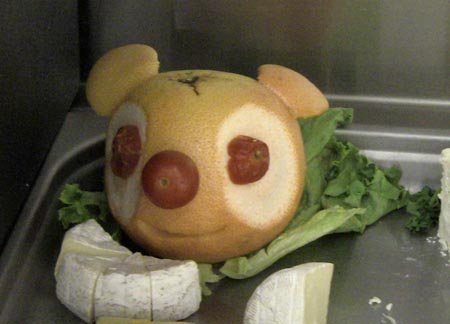 Peter Cassidy is the Camp Boss on Expedition 329, which means that he is responsible for the galley and staterooms. He finds it similar to managing a hotel. Peter must order the food that will be needed for the expedition. About $50,000 worth of food is consumed during each month of an expedition and there is enough food on the ship to last for about 70 days. Peter previously worked for many years on ships connected with the oil industry. He grew up in Scotland and worked for awhile in hotels there.

Joel Encarnacion is the lead steward on the JR. He has worked on board since the JOIDES Resolution was refurbished in Singapore several years ago. Previously he worked on rollon-rolloff ships (goods are rolled on and off the ship), for a cruise line and for a casino ship out of Florida.

Loreto Olegario has worked on other ships but likes it better on the JR. He worked on a cruise ship prior to sailing on the JOIDES Resolution. He currently works in the galley washing utensils and cleaning the dining area.

Nestor Murallon is the assistant cook. He has sailed on several expeditons aboard the JR. Previously he worked on service, container, and cargo ships. He went to culinary school and perfected his cooking skills by working on ships. He loves the sea and has spent 31 years out here. During this time, he has traveled to places such as South America, Asia, and Africa.

Jayson Pajarit is the assistant to the camp boss and has worked on the JR for about two years. He has worked on other ships and on land as a steward. Jayson likes working on ships and gets to travel because of this.

Arnold Puerto is a steward and is sailing on his third cruise aboard the JOIDES Resolution. He worked for a cruise ship prior to his working on the JR. In his spare time, Arnold likes to work out in the fitness room and also enjoys playing basketball and volleyball.

Eric Tubadeza is one of the stewards on board. His current area of responsibility is taking care of the core deck and the staterooms, but in the past he has also worked in the galley. He is on his second cruise aboard the JR and has also worked on another ship owned by Transocean. In between cruises, he works on a deep-sea oil platform near the Philippines. Eric grew up in Luzon, one of the northern islands in the Philippines. When he returns home, he likes to visit friends, play basketball, darts, billiards, table tennis, and he loves to go dancing. As you can see, he likes to stay active.

There are many others who are part of the catering crew (see photos) below. I have highlighted a few to give you an idea of the catering crew’s background. With the ship operating 24 hours a day, the catering crew is always busy. They prepare four meals a day, as well as bake fresh cookies for break time. Each member works a twelve hour day to make life better for us.