Scientists boarding the JR in Guam
Back on the JR (!!??). Guam, Magnetometers and Serpentine… 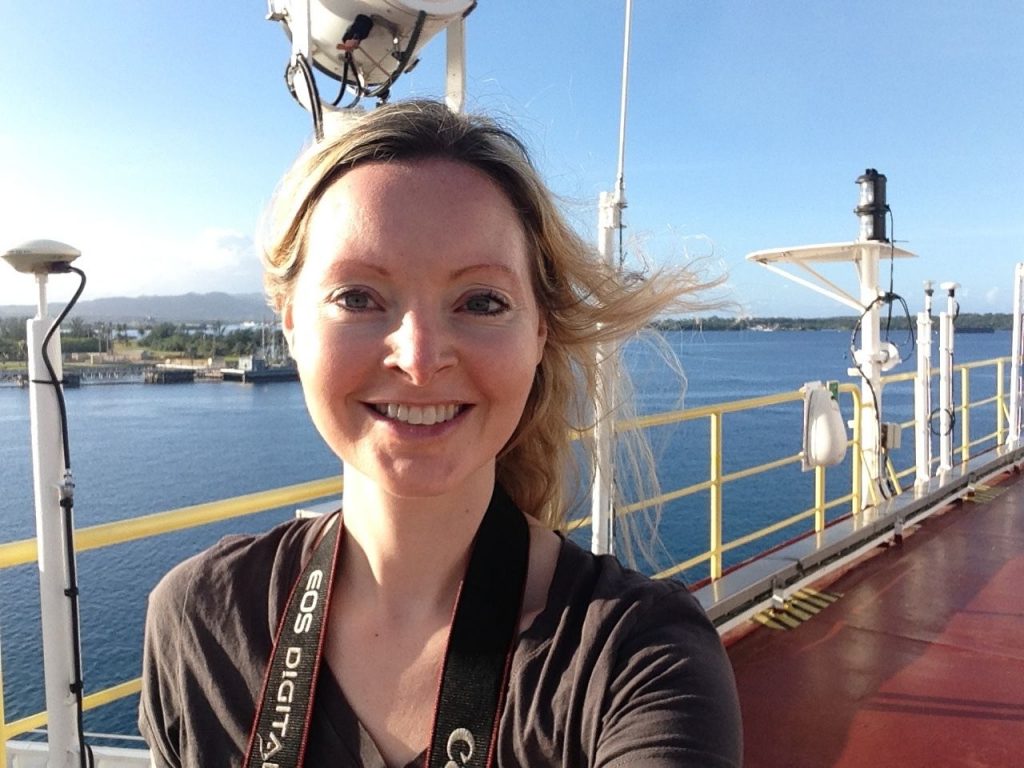 Hello there JOIDES fans! I’m Kristen, one of the onboard outreach officers for Expedition 366, and I’m thrilled to document the exciting science onboard the ship for the next 2 months as we travel along the outskirts of the Mariana trench. I, along with my co-educator Martin, will be taking you along on a virtual journey as scientists take samples of blue mud from hundreds of meters below the seafloor to learn about tectonic movement, seismic activity, and the origins of life on earth. 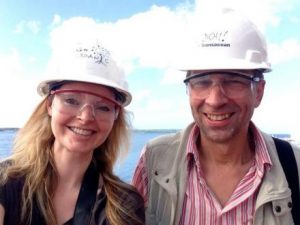 Me (left) and Martin testing out our hard hats and safety goggles on the JOIDES Resolution front deck.

A bit about me: I have a PhD in marine wildlife management, and have taught marine science both at aquariums and universities. Currently I’m a postdoc at Stanford University’s Center for Ocean Solutions, where I help ‘translate’ ocean science to broader audiences via news stories and features, presentations, films, and more. I love tropical islands, SCUBA diving, manatees, and chocolate. Lots of chocolate. I also love watching and making science videos, which I’ll be doing onboard.

While on the JOIDES Resolution, I look forward to sharing the stories of the many scientists and crew members, showcasing the amazing technology onboard, and explaining some of the important science occurring during this expedition. I will be assisted by my dear cephalopod friend, Ollie the Octopus, who likes to explore and may try to hide in some of my photos and videos. Be sure to keep a lookout for Ollie! 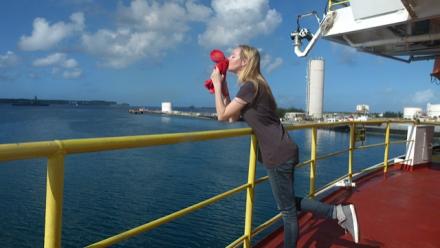 Ollie and I sharing a friendly embrace at the bow of the ship.

In two days the ship will leave Guam and travel along the Mariana forearc—the boundary that lies between the trench and the active volcanic island chain. This region is the subduction zone< for the vast Pacific Plate. Along our route, we will stop to take core samples from three undersea mud volcanoes, named Blue Moon, Big Blue, and Celestial Sea Mount. For many in the science party (including me!) this is their first time on a core sampling ship, so it will be extra exciting when we pull our first core up onto the ship.

I hope you will follow along with my blog and social media posts (Facebook and Twitter) so you can go on this journey with us. Martin will be publishing many of his blogs and posts in German, as Germany is his home country. Stay tuned as we get underway!