Back on the JR (!!??). Guam, Magnetometers and Serpentine… 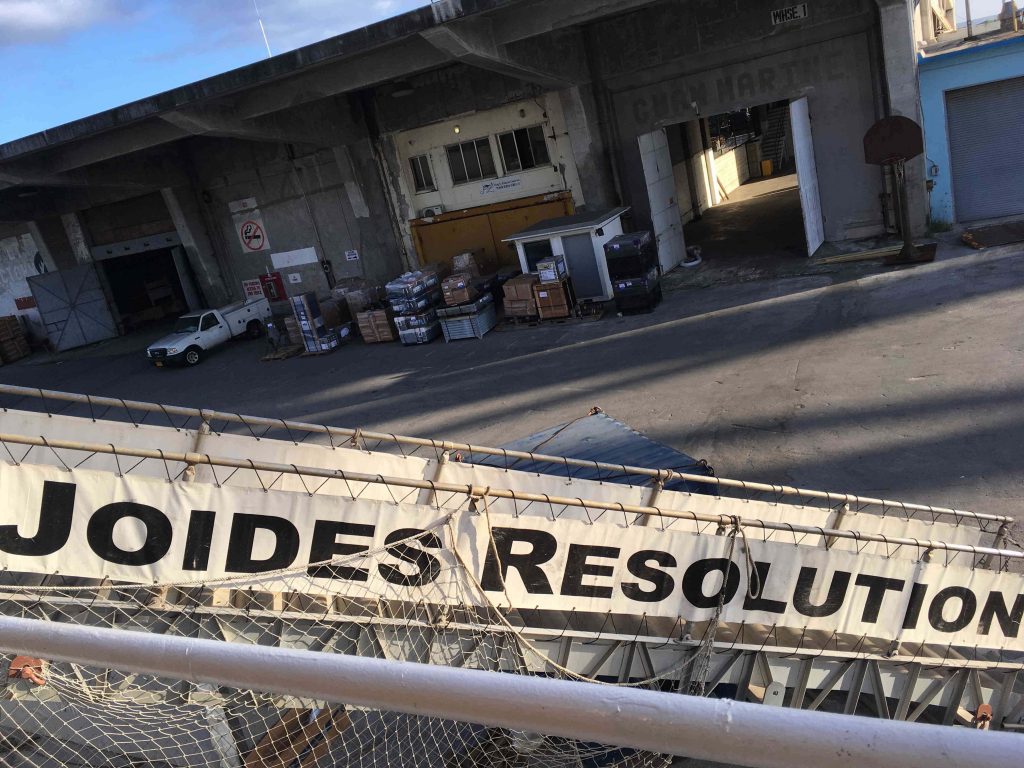 It wasn’t real to me until I walked up the gangway again, after a couple days in a rather plush Guam hotel (with great views of Tumon Bay – which was itself quite clear and nice for soaking) and a long-ish ride past several sections of the War in the Pacific National Park, where in World War 2 U.S. soliders landed to re-take the island from Japan – at a harbor (next to the Navy base) that is spare and utilitarian compared to the massiveness of Yokohama, or the coziness of Keelung. They’ve given me the same job (Inorganic Geochemist), put me in the same stateroom (4U-5), and on the same shift (Midnight to Noon!) – so I grabbed the same bunk for good measure. Almost half the JRSO Technical staff on our Expedition were on my first sail (Expedition 352), as were three the Exp. 366 shipboard scientists – so there’s been a lot of happy greetings and catching up, as duties and meetings have permitted.

In other ways, however, this start-of-cruise has been quite different from the last.  For one, the JR Core Deck has been under construction, with the installation of a new magnetometer.  This has slowed progress in the science team orientation some, if only for the lack of gathering spaces, and it’s led to a bunch of marathon meets in the Conference Room and doing some things a bit out of order.  Also, the last Expedition was a record-setter, with nearly seven kilometers of core recovered (!!), so the Technical Staff was under serious pressure to get all of this off and away to the Repository and also get our supplies and equipment onboard.  The other BIG difference is the science team itself – while we have the usual four Geochemists, the Core Deck team are mostly Core Describers, not Petrologists – and we have a big cohort of microbiologists onboard!  So there has been much hubbub about -40°C freezers and working in the Hold (at +4°C) and figuring out how to take Whole Round samples for DNA or microbial or virus analyses – all new to me!

Why so different?  It’s all about Serpentine, which is what we’re here to drill and recover in the Mariana forearc.  Along the front of the Mariana island chain, sitting outboard of the arc and just inboard of the trench, are a little mountain range of 2-3 km tall, 5-10 km wide, COLD volcanoes that erupt serpentine muds and fluids.  These were discovered in the 1970’s, and two of them were visited on Ocean Drilling Program legs, most recently some seventeen years ago on ODP Leg 195, when the South Chamorro serpentine seamount was drilled, and the hole was “CORK-ed” with an instrument package to track and analyze the fluids that were upwelling and flowing out of it.  We’ll be visiting South Chamorro to retrieve that CORK assembly and set up for a new borehole instrumentation system, and we’ll visit and drill three other seamounts: Blue Moon, Big Blue, and Celestial – and we’ll set them up as well for instrumenting before we go.

Why am I back, and on this cruise?  The short answer is that this is THE Expedition I’d always wanted to be on – but I thought would never happen.  It was proposed in 2003, and I actually reviewed the proposal for the (then) Ocean Drilling Program as a science expert.  But it never appeared on the Expedition schedule, so I thought it was a no-go – until, less than a year after my Expedition 352 experience, it finally did appear!  Applying was a no-brainer (and a very delicate conversation with my wife, who had patiently endured my absence for 352, presuming that was a once-in-my-career kind of thing.  I’m still working to get her to meet me in Hong Kong when we arrive at the end of our Expedition in February…).

We’ve got a couple more days in port here finishing up instrument installations and loading and such – but unlike Yokohama, we’re far away from any kind of urban amenities, and the port authority doesn’t want us just wandering in and out.  So the last couple nights they’ve had a van rented to haul us to and from the nearest bar and grill:  called the Sunset Grill (picture below), a quite nondescript place on the outside, that is hard against the beach, and charmingly retro on the inside.  They had a live band last night – a bunch of guys my (not insubstantial) age and older who played songs of the ’60’s and 70’s with great aplomb, and clearly enjoyed having some older folks at the front table egging them on.