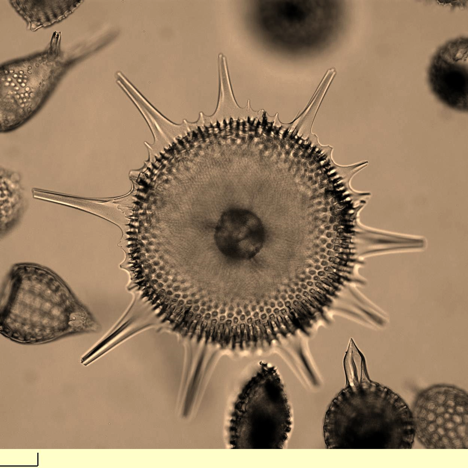 Or perhaps a better title would be “In praise of Annika Sanfilippo”. Until now, I had not quite appreciated what an extraordinary contribution Annika and collaborators (mainly Bill Riedel, but also Cathy Nigrini and others) have made to radiolarian micropaleontology.

Left: Periphaena decora, from the middle Eocene (45 million years ago) at Site 1403

In a series of scientific publications spanning 30 years from 1970 to 2001, they established what is now referred to as the Cenozoic radiolarian biozonation for low latitudes. It is based on 66 million years of radiolarian evolution and carefully mapped out by the incomings and outgoings of distinctive species. Most extraordinary are the evolutionary transitions, where over a series of slides, spanning a few million years, you can observe a descendent species appear, increase in abundance, and eventually replace the ancestor species.

Coming from the southwest Pacific, I had always been a little suspicious of these evolutionary “bioseries” because what we tend to observe in higher latitudes is the sudden appearance of a key species as climate warms and the species is able to invade from low latitudes. But at this site off Newfoundland, the low-latitude biozonation works like a charm.  I am truly in awe of the meticulous efforts of Annika and her colleagues who examined thousands of microfossil slides collected from DSDP and ODP expedition to resolve this wonderful history of plankton evolution.

And it’s really important for establishing the age control for Site 1403, where radiolarians are the only regularly occurring microfossil through the Eocene. It’s keeping me extremely busy, so time for blogging is much reduced. Back to work on zones RP7 to RP13.

Thyrsocyrtis tensa (centre) and friends from the middle Eocene at Site 1403.