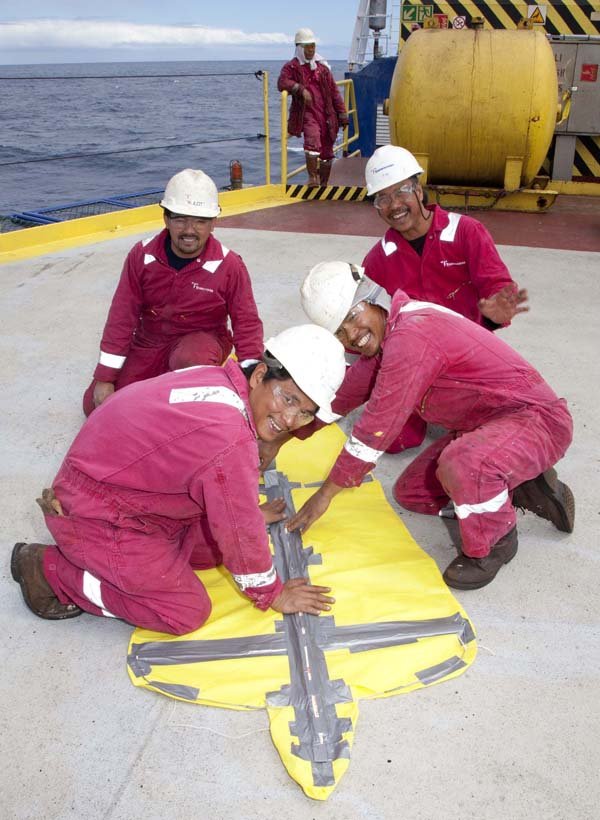 Expedition 329, “South Pacific Gyre Subseafloor Life,” was rather unique in that much of the research work focused on life within the seafloor. The scientists were interested whether or not microscopic life could exist within the sediments and rock in a part of the ocean where nutrients are very limited, the center of the South Pacific Gyre. One concern was, “Where would the microbes be able to get the energy needed to support life?”  Another question was, “How deep within the sediments could life exist?”
I used some of my time aboard the JR, roaming the various labs and learning how the scientists were tackling these questions, among others. Some of the results will not be known for five years or more. Why so long? To learn about the microbes, cultures must be grown and since nutrients and energy are sparse at this location in the Pacific, the microbes most likely reproduce very slowly. A rather surprising discovery made while the expedition was still in progress was that oxygen was present deep within the sediments on the ocean floor. So perhaps organisms will be found much deeper than anticipated. Sunlight does not reach the deep ocean floor and very limited organic material settles to this depth in the South Pacific Gyre, so it appears that a source of energy to carry on metabolism might be coming from the liberation of hydrogen from water. Radioactive decay from elements in the rocks would fuel this process. One of the scientists was investigating this aspect. This summer, the Expedition 329 scientists planned on having a post-expedition meeting in Hawaii to discuss their results so far.
Life at sea for two months means that crew members and scientists look for activities to make life a little more exciting. There was a billiards tournament, Halloween dance, and my favorite – a kite flying contest. The kite flying contest allowed many more people to participate and believe me, it is a challenge trying to make a kite out of materials scrounged up on the ship. My kite looked pretty good but that didn’t translate into a good flying one. It nose-dived over the side of the heliport repeatedly but it was a lot of fun anyway! The winner was one of the crew members; his flew so high that it was difficult to even see it.

High flying kite from the crew.

There were plenty of award categories!

Scientists are not all work and no play.

I don’t make for a very good pirate.

Testing for carbonates in the chemistry lab.

Some of the work involved working in the “freezer” since organisms lived on the cold ocean floor.

Samples were taken immediately from the cores before any changes could take place.