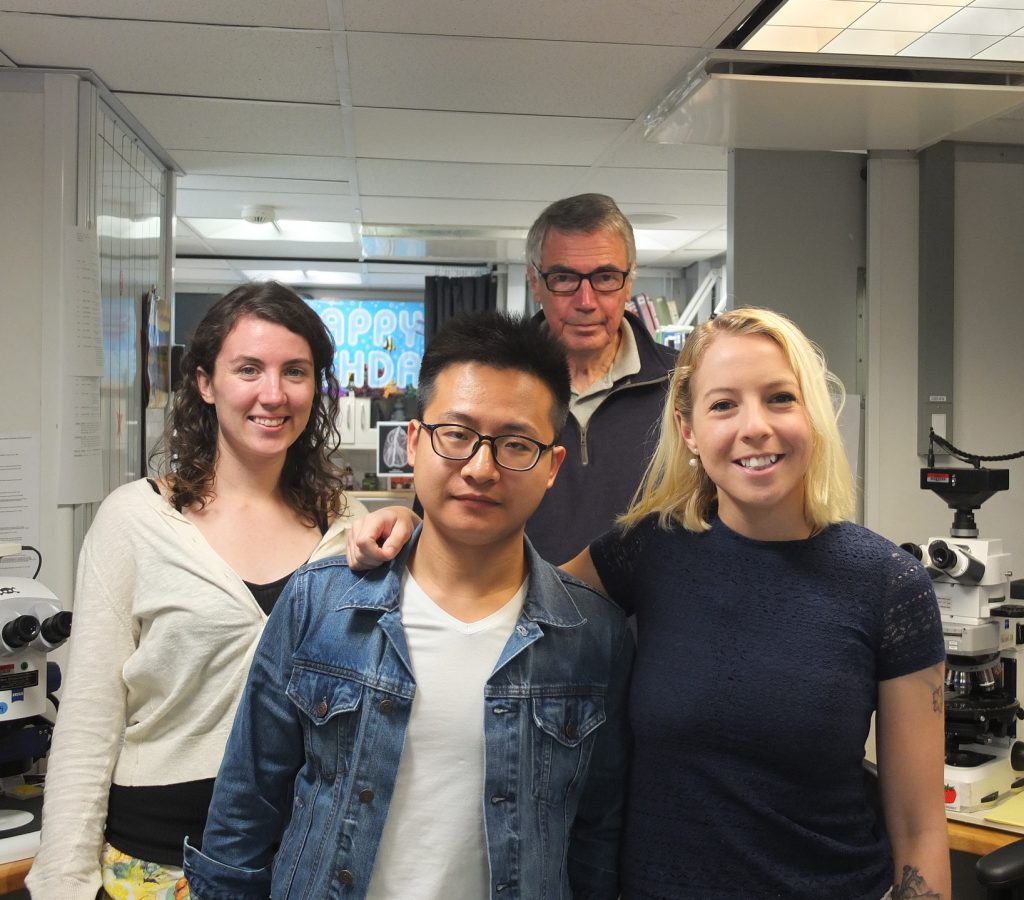 We have 4 micropaleontologists on board during Expedition 362 who are working together to track the age of the core.

Meet our micropaleontology team! From left to right: Freya for Diatoms, Wen-Huang for Foraminifers, Jan for Nannofossils and Sarah for Radiolarians.

Why are we using microfossils?

On board, the four micropaleontologists are each specialized in a different fossil group. Take a look at the kinds of microfossils which we found a site U1480, 4126 deep on the seafloor.

Each fossil type are single-celled plankton. Radiolarians and diatoms both have a glass skeleton (made of silica), but diatoms are phytoplankton whereas radiolarians are zooplankton. This means that Diatoms are capable of photosynthesis, so are restricted to the photic zone (water depths down to about 200 m if the water clarity is good).

Foraminifer and nannofossils have skeletons made of calcium carbonate. Most foraminifers (forams for short) have shells that are commonly divided into chambers and are added during growth. The simplest forms are open tubes or hollow spheres. Most of the species live on or in the sand, mud, rocks and plants at the bottom of the ocean and the remainder are planktonic (living in the water column).

Nannofossils are so small that they are barely discernible under a light microscope! One extant group that produces “nannofossils” is the Coccolithophorids, which are a planktonic alga that are very abundant in the world’s oceans. A coccolith is a single disc-like plate which is secreted by the algal organism and held in combination with several other to form the coccosphere. On death the individual coccoliths invariably become separated: the calcareous plates accumulate on the seafloor and are preserved as nannofossils. The picture illustrates the tremendous size difference between a radiolarian made of silica and a calcareous nannofossil made of calcium carbonate (“calcareous”).

Since nannofossils are phytoplankton, like diatoms, they are distributed throughout the photic zone (especially the upper 50m of the water column). The planktonic mode of life, rapid evolution and the tremendous abundance of calcareous nannofossils makes them very useful tools for biostratigraphy.

Paleontologists can dertermin the age of sediments by using the microfossil assemblages contained within them. To work well, the fossils used must be widespread geographically and the sediments must contain a lot of different species.

When we are drilling into sediments, generally the deeper we drill the older the fossils we find. Different species have appeared, evolved and became extinct. The main goal of our micropaleontolgy team is to find and identify these fossils to create an age model for the sedimentation accumulation rate through time.

A biozone is a body of sediment or rock characterized by its fossil content (absence or combinations of fossils). There are 5 types of biostratigraphic interval zones (see the picture below):

Not every fossil is useful. Some species evolved slowly and have existed for long time periods. Therefore, these fossils don’t give a good precision of the age of the sediment. Short lived species make our micropaleontology team happy. Some particular species give very specific constraints on the ages making the work of the micropaleontology team easier. Statiscally, having juste one or two species is not very useful for them, even if the number of the fossils is very important.

Using these techniques, our team of micropaleontologists are able to date the sediments drilled during Expedition 362. The sedimentologists and other geologists can use their work to analyse the sequeneces of sediments and rocks encountered. For example, they can calculate sedimentation rates, relate these to climatic changes or major tectonic changes such as the uplift of large mountain ranges and get information on the depositional environment at the site.

My blog in french: here