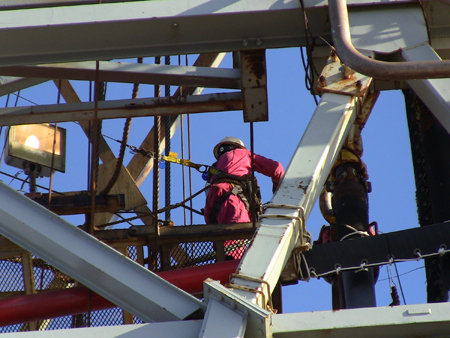 Early this morning the crew finished pulling up the drill pipe and storing it away. We are now making our way to the next site, U1370, which is still further to the southwest. The weather is perfect today! An interesting sight is all of the albatrosses following the ship today, (see photos below). They are amazing to watch as they skim just above the water with their huge wing span.

Yesterday, the scientists were very busy as many sediment cores were brought up on deck. The microbiologists spent a lot of time in the refrigerated room taking samples, while in the chemistry lab, many were busy squeezing the water out of the sediments for later analysis. The water depth was 5300 meters at this site, so you can see that we are moving away from the ocean ridge as we move further from the center of the South Pacific Gyre.

As we transit, data gathering does not come to a halt. The science crew drags a magnetometer behind the ship and we gather magnetic data about the ocean floor. Many of you have seen maps showing the magetic strips on the ocean floor due to the earth’s magnetic pole orientation. These transits present the opportunity to collect information for regions where magnetic data is lacking or is scarce. Theres are several photos below of the magnetometer.