We’re on Our Way Again! 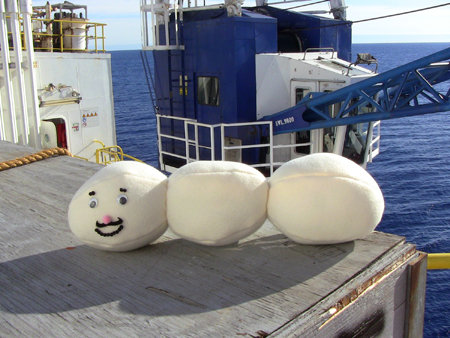 Another beautiful day in the South Pacific Ocean! I think I’ll work on my tan as we leave site U1369 and travel to our next location. In fact, I’m not the only one taking advantage of the weather. Today, we have many albatrosses following the ship. An albatross is a very large bird that can fly great distances from land. They are flying around and landing in the water. Most other birds do not fly this far out to sea since there is no nearby land for resting. I have included some photos below.

Early this morning, the crew pulled up the last piece of drill pipe and we are now on our way. It will take us about 2 days to reach the next location where we will drill again. We are moving in a southwestward direction and the temperatures should continue to cool.

Any time, the ship is moving, a magnetometer is dragged behind. A magnetometer is an instrument that detects magnetism that is in the seafloor rock (basalt). This is used by scientists to learn about the movement of the earth’s tectonic plates. (photo below) When lava pours out of the seafloor at the ocean ridges, it "records" the direction of the earth’s magnetic field at the time. Once the lava hardens, becomes basalt, the magnetism is locked in place and this can tell the scientists about the earth’s past.