First core is on deck!

Animals on the JR?
A Thanksgiving Barbecue! 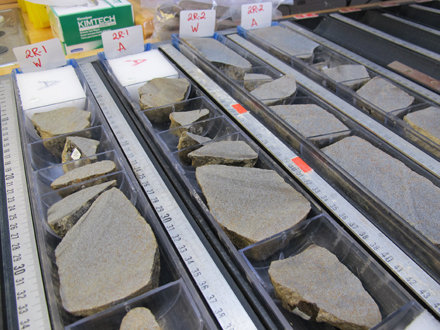 We have been drilling down into the seafloor for a few days at a new hole, U1382A, which is about 50m away from ill-fated Hole 395A. That’s only about 1/3 of the length of the JR, so it’s not that far away. First, we landed a re-entry cone with some casing (steel tube) to reinforce the hole once we started drilling. Then yesterday, we began to drill into the basalt crust with a Rotary Core Barrel (RCB) drill bit. This bit grinds out the rock in sort of a donut shape. The center of the donut is the core, and it runs up into the plastic core liner, which we can then pull up to the surface for sampling.

Our first core came up last night around 11:00 PM and everyone, whether they were on shift or not, was there to see it! We only cored about 4 m of rock, and we recovered about 1.3 m of core. That’s a pretty good recovery for basalt! First, the core techs inspected and measured the core on the catwalk, and cut it into 1.5 m sections (there was only one from that first core). Then, they took the core into the splitting room and carefully shook the contents out onto a prepared core liner.

Because we are studying the microbes in the crust material, we all had to be really careful not to contaminate the sample, so the lead scientists examined the rocks closely—without touching it—in order to choose the pieces they’d like to test for microbes. Once those samples are removed and processed, the rest of the core can be cut, measured, photographed, inspected and tested by the rest of the scientists and lab techs. It’s a lengthy process that begins again about every 3-4 hours with each call of “Core on Deck!”