First core is on deck!
The Weight of Water 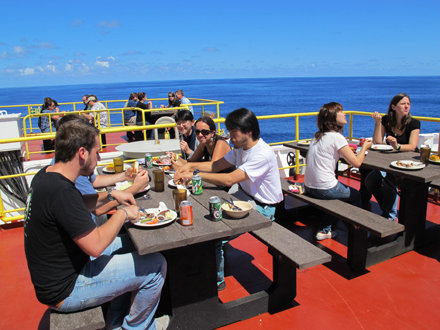 Apparently it’s not a well-known fact that Canadians celebrate Thanksgiving in October. When we had a fabulous turkey dinner with all the trimmings this last week, I realized that the camp boss probably had no idea either, since he probably wouldn’t make two of those in one week! So I sheepishly approached him and asked if he knew about the oddly-placed Canadian holiday; he confirmed that he was “verra soarry,” he hadn’t planned on it. So instead of turkey and stuffing, gravy, sweet potatoes and cranberry sauce, we had our first BBQ on the bow!

And what a barbecue it was! Burgers, dogs, steaks, chicken, and prawns on the grill, garnished with every topping you can think of. Deviled eggs, potato and pasta salads, coleslaw, and vegetables. Scrumptious cakes…and flan! I never thought I would have flan for Thanksgiving, but it was certainly a delicious end to the meal. We even had soda pop in cans…what a treat! That galley crew sure knows how to put together a fantastic BBQ!

The weather was brilliant. Scientists, technicians and crew all gathered on deck in hats, sunglasses, sunscreen, and even Hawaiian shirts (it was Aloha Friday, after all), ready to celebrate whatever needed celebrating. We even saw some cool fish, including a big, bright mahi mahi and some others we couldn’t identify (they looked kind of like ocean triggerfish), feeding on scraps thrown overboard. It was a glorious day. Quite different from the Thanksgiving dinners my friends and family are cooking up back home in the grey and rainy fall weather. All the same, I want to give thanks for the wonderful people I am getting to know on this amazing ship out here on the deep blue sea.