Food for the Microbes

What is the Big Question?
What do microbes eat? 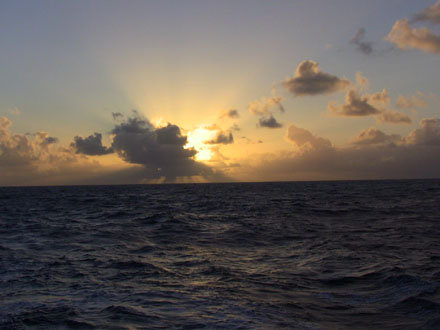 Today’s sunrise was magnificent! Each day seems to be offering bluer and bluer skies. The scientists are busier than ever as we are approaching our first sampling site.

Yesterday, I mentioned that we are going to portion of the ocean where very little organic material makes it to the seafloor and that scientists are wondering about the amount of biomass within the sediments. So let’s find out a little more about the science. Sediments can contain particles of radioactive elements derived from land erosion. As radioactive particles decay, they release alpha, beta, or gamma radiation into the seawater. This radiation breaks down water molecules into hydrogen and oxygen atoms. The hydrogen is then available as a source of energy for organisms, such as the microbes that the scientists are studying. This brings up the question “Do the deep ocean microbes get most of their energy from sea surface processes (organic material sinking from above) or do they get it from the splitting of water due to radioactivity?”

Another interesting aspect is that the sediments are underlain by basalt. The basic rock of the ocean floor is an igneous rock called basalt, which contains a lot of the element iron. The basalt basement rock is not the same age at all of the drilling sites we will visit. Some is as young as 6 million years old while at other sites it is over 100 million years old. Organisms can sometimes get energy by oxidizing the iron found in the basalt. This process involves oxygen combining with iron (we call it rust). This brings up the question of can microbes live within basalt and get energy from oxidation? Some of the scientists think that microbes may live in areas where the basalt has been fractured so when the cores come on deck, they will be looking for fractures that most likely will be filled with mineral material.

Now you can see the importance of having a variety of science specialties on board during an expedition. There are chemists aboard who will take measurements of the hydrogen concentrations; other scientists will measure radiation in the sediments, and others will concentrate on the microbes. Combining all of this information will hopefully allow the chief scientists to complete the objectives of Expedition 329.

Don’t forget to check back tomorrow as we should be arriving at our first drilling site.