Geek Blog 1, from the summit of Yinazao: What IS the deal with Mariana Serpentinites? 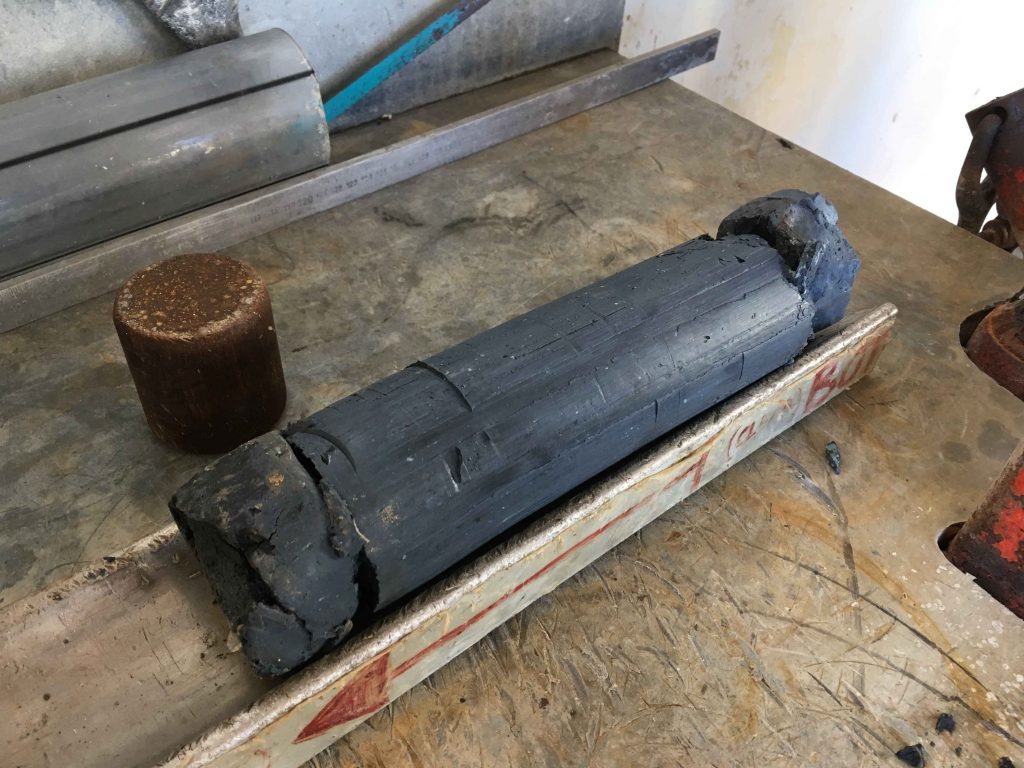 OK – several blogs ago I promised to explain why this was THE Expedition I always wanted to be on, with the teaser that it had a lot to do with Serpentinite.

Serpentinite, formally defined, is a rock made mostly of Serpentine, Serpentine is a common mineral formed during the metamorphism of olivine-rich rocks.

Apologies in advance for a chemical equation!  But it is the easiest way to explain making Serpentine:

The simple form of this is: add water to olivine and you get serpentine.

Olivine is the most common mineral in the earth’s mantle, so what is happening in the Mariana forearc is that we’re adding the water that is released from the subducting Pacific slab’s ocean crust and sediment to the mantle rock that overlies it.  The olivine in that mantle rock reacts with that water to become serpentine.

Serpentine is a uniquely plastic mineral: it has a sheeted structure, and because of this it deforms readily and can flow.  It’s also a rather soft mineral, so it’s pretty easy to grind it up during tectonic processes inside our planet.  What is happening in the Mariana forearc is that the serpentine formed in the shallow mantle above the subducting slab is being squeezed and ground up by faulting in the overriding plate and upward fluid flow from the slab, and is flowing upward to erupt as deep blue mud (see the teaser pic!) on the seafloor.  This has apparently been going on ever since the Mariana arc system began, so some of these seamounts are really big and tall, though Yinazao is a comparatively small and deep, at 3600 meters below sea level.

Why I care so much about this is the water that’s involved in this reaction:  it comes from an old, soggy subducting plate that was once the bottom of the Pacific Ocean.  We think that some of the water on subducting plates gets deep, to ~100-120 km beneath the earth’s surface, and helps trigger the melting that causes arc volcanoes.  The dissolved water in their lavas is what makes arc volcanoes so explosive and dangerous (Mt. St. Helens, Mt. Ranier,  Augustine Volcano in Alaska, Mt. Pinotubo, in the Philippines, Volcan Colima and Popocatepetl in Mexico – these are all arc volcanoes!).   This water also is behind all the giant earthquakes we have in the western Pacific (Sumatra, Japan) in Alaska, and along South America (Chile, Ecuador).  So, understanding how this water gets off downgoing plates and how (and where) it moves through the Earth is really important in trying to understand volcanic and earthquake hazards globally.   Also: there are hints in the compositions of lavas in places like Hawaii and Iceland that materials involved with subduction somehow got into their REALLY deep mantle melting sources (??).

So, understanding what CAN get subducted deep (both in terms of water and other chemical elements) and what gets returned to the Earth’s surface early on is critical to understanding volcanism at arcs, and to knowing whether or not subducted stuff in the mantle that melts to make Hawaiian and other “hotspot” lavas.  I’ve been working on addressing both of these questions for nearly my entire scientific career.

The serpentinite seamounts in the Mariana forearc are the only places on Earth where we can directly sample rocks and fluids that were formed when slab fluids react with the mantle.  That this reaction happens very shallow (only 20-40 km deep) means we can measure what is removed from the subducting plate early, and thereby know what’s left to be carried deep into the mantle.   That’s why the first science project I ever got funded to do involved looking at serpentinized rocks from the Conical forearc seamount further north in the Marianas, and why I helped a student of mine to go on ODP Leg 195 over fifteen years ago, when I couldn’t go myself.   So, when fifteen years later, the opportunity for this Expedition was posted, it was, as an Emeritus colleague of mine in Tampa is wont  to say, a “no brainer”: I had to be on this ship!

And yesterday, we hit blue gold:

Our first Yinazao summit drillsite yielded the wonderfully colorful core above, grading from greenish yellow (bottom right) downward into paler greens and eventually a deep blue color (top and left)  The blue stuff is serpentinite – serpentine muds and pieces of mantle rocks variably changed over to serpentine, unadulterated by contact with the oceans – while the rest is predominantly serpentinite that has suffered variable degrees of chemical change due to seawater. Nearly all of the color change relates to iron: the comparatively oxygen-rich seawater shifts iron to is 3+ valence form, making the yellower colors, while the deepest rocks haven’t seen the oceans and as such preserve their 2+ iron and the characteristic deep blue-to-green colors it imparts.  Part of my job as a Geochemist on the JR is to extract Interstitial Water from these materials, so the rest of the day I was running up and down the stairs to shouts of “Core on Deck” getting new sections to squeeze water out of  (more on that in a later entry!).

Our “down” time is becoming less abundant as new core is now becoming more frequent here at the summit.  We are, however, heading into the Christmas holidays, and this is not going un-noticed on the ship:

There are rumors of a Christmas talent show (people keep asking me what musical instrument I’ve brought along (??)), and there was a Gift Exchange we were alerted to in advance.  Hopefully what I brought for someone (??) will be appreciated….