Geochemists: Living in the Lab of Luxury 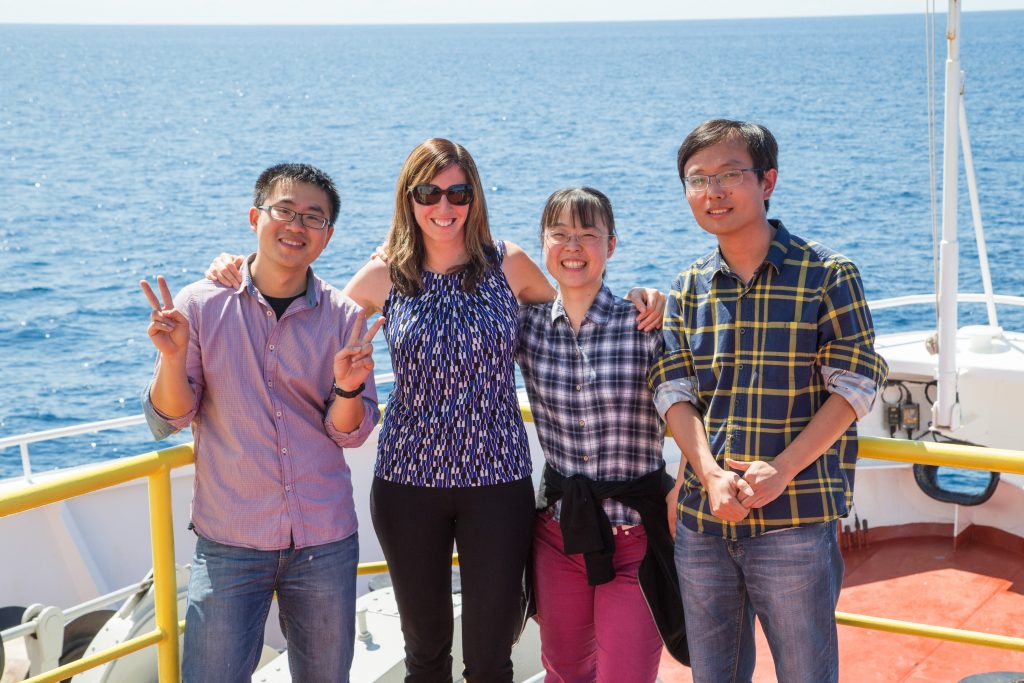 Most of the scientists are based up on the core deck, where they have easy access to the sediment as it comes in. The downside is they don’t have much space to spread out, and if people aren’t watching where they’re going, someone’s likely to get a core section to the back of the head.

The geochemists don’t have this problem. They have their own lab down on the poop deck that’s nearly as big as the rest of the labs combined. And there are only four of them on this expedition! They need all this room for their huge amount of supplies and equipment, and so that they can play loud music without bothering anyone else. The downside: if they need a sample they have to run up a flight of stairs for it (running into a busy chemist on the stairs is a real hazard). Luckily they only ever need tiny samples, so that’s not too much bother.

Chemistry is the study of what things are made of. So the chemists are who we go to if we want to find out precisely what sort of things are in the sediments. Here’s a quick rundown on a few of the tests they run with different equipment:

First, they use a Gas Chromatograph to check the core’s level of hydrocarbons (like methane and ethane). These are organic molecules formed by ancient decaying plant and animal matter, and high levels can mean that we’re near natural gas deposits. And we don’t want that!

Hydraulic presses are used to squeeze water out of the sediment. The chemists do most of their testing on this “pore water”.

Autotitrators are little robotic lab assistants that slowly add reactants to a sample until it stops reacting, to find out how much of a certain chemical is there. This is handy for checking pH and alkalinity levels. The chemists could titrate by hand, but they’re busy people.

The Ion Chromatograph separates and analyses different chemicals from the sample. It’s a lot like the Gas Chromatograph, but for less gassy samples, and is used to find levels of magnesium, calcium, sodium, chlorine, and sulfates.

The Coulometer works a bit like the titrator, but slowly applies an electric charge instead of a chemical. By finding how much electricity it takes to fully charge a sample (a bit like a battery) we can figure out how much of a chemical is there. This is used to find carbonate levels (usually from ancient shells).

The Spectrophotometer shines a light through samples and analyses how the sample absorbs or transmits different colours. This is handy for finding phosphate or ammonium levels.

The Refractometer is one of the simplest tools in the lab. It looks a bit like a telecope, and by putting a drop of liquid on the lens, and seeing how it bends the light, we can find out the liquid’s salinity (its concentration of dissolved minerals).

The fume hoods are ventilated, safety-screened workspaces, for using hazardous chemicals and gases. These are what take up a lot of the room.

Most importantly, to get an accurate result for their tests, the chemists always need to know exactly how much sample they have. But how can you accurately weigh something on a ship that’s constantly moving? The chemists solve this with specialist scales which take a lot of measurements, and then average them out to get a precise weight. It can take four minutes to weigh one small sample!

After running their tests, the chemists upload all their data to the ship’s network. Knowing the chemical composition of the cores can tell us so much about the climate and atmosphere at the time the sediments were formed. They’re a vital part of the JOIDES Resolution team, so we won’t begrudge them their giant fancy lab with ocean views too much.

Keep up the good work, chemists!