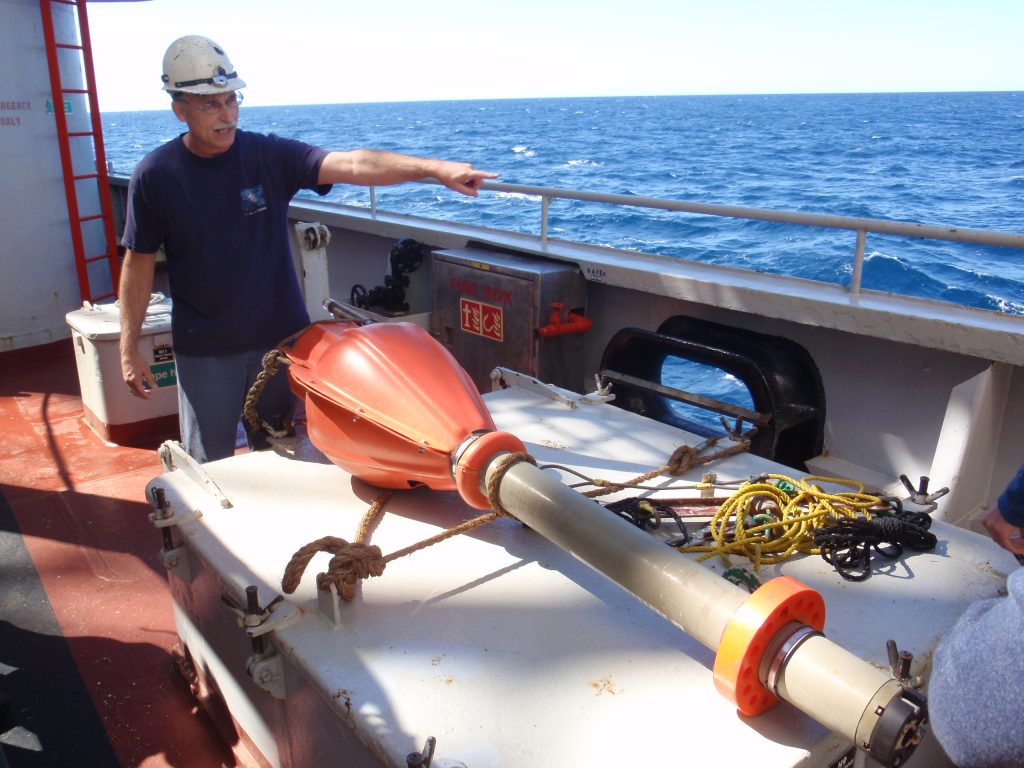 The JR has pulled into site U1462, and while we wait for the first cores to come up, the scientists get a tour of the parts of the ships we normally don’t get to see. For most of the expedition, we live and work near the bow (front) of the ship, in the laboratories, accommodation, mess hall, and rec areas. Apart from the odd job around the helipad, we almost never get a chance to venture astern of the drill floor. So everyone was keen to explore the noisy world of heavy marine industry!

Equipped with hard-hats, earplugs, and safety glasses, our first stop was the magical-sounding moonpool. This is the big hole through the bottom of the ship that the drill string passes through. Even though the moonpool was mostly covered, it was still pretty spectacular, with a few confused fish swimming around its glowing blue depths. Luckily for them, fishing in the moonpool is strictly forbidden.

Onwards, through the storage, workshop, and drill preparation areas! Deep-ocean drilling is a complex and sophisticated task, and the JOIDES Resolution carries spare parts and tools for every drilling scenario, as well as an array of liquids, powders, sensors, and other mysterious equipment. The image at the start of the blog shows Steve Midgley, our operations superintendent, explaining one of the positioning beacons.

Then on to the Engine Control Room for a chat with the engineers! The JR is a large, complicated ship, and most of its mechanical operations are run from this room in the stern. In fact, the engineers tell me that if they had to, they could drive the whole ship from down here! Until recently, if the captain or bridge crew wanted to change the speed or direction of the engines, they had to send a message to the engineers, who would adjust the engines from the ECR. Nowadays most of the ship’s movement is able to be controlled directly from the bridge, but the engineers are still responsible for plenty of other operations.

With a crew this size, the JR can only carry enough water for a few days. So some of the machines down here make drinkable water by pumping in seawater, and desalinating and purifying it (through boiling or vapourising). I can attest, it tastes pretty good.

The toilets on the JR are surprisingly roomy, and use a vacuum system which moves all the waste swiftly away to the treatment plant. It is dealt with there in ways I am not privy to, though I am sure they are harsh but fair.

The JR uses a LOT of electricity, for lights, computers, high-tech lab equipment (see previous posts!), the drill rig, and even the propulsion systems! And for a ship this size, we have an unusual amount of propulsion, with 12 positioning thrusters and 2 main propulsion screws. All that electricity is generated by the five main engines, and two smaller ship-service generators. These run on diesel, and we use more or fewer depending on our needs. Right now, stationary and drilling, we’re using three engines. Full steam ahead might be more like four. But of course, that’s just metaphorical steam.

Each of these engines is effectively a diesel locomotive (photo by Christian Haller, palaeo)

The engineering areas of the ship are noisy, greasy, and exciting, a totally different world from the quiet, university-like atmosphere of the laboratories. The scientists were glad to have a glimpse into the business end of running a drillship, and it’s certainly given us a greater appreciation of how complex this whole operation is!