Getting on the JOIDES Resolution 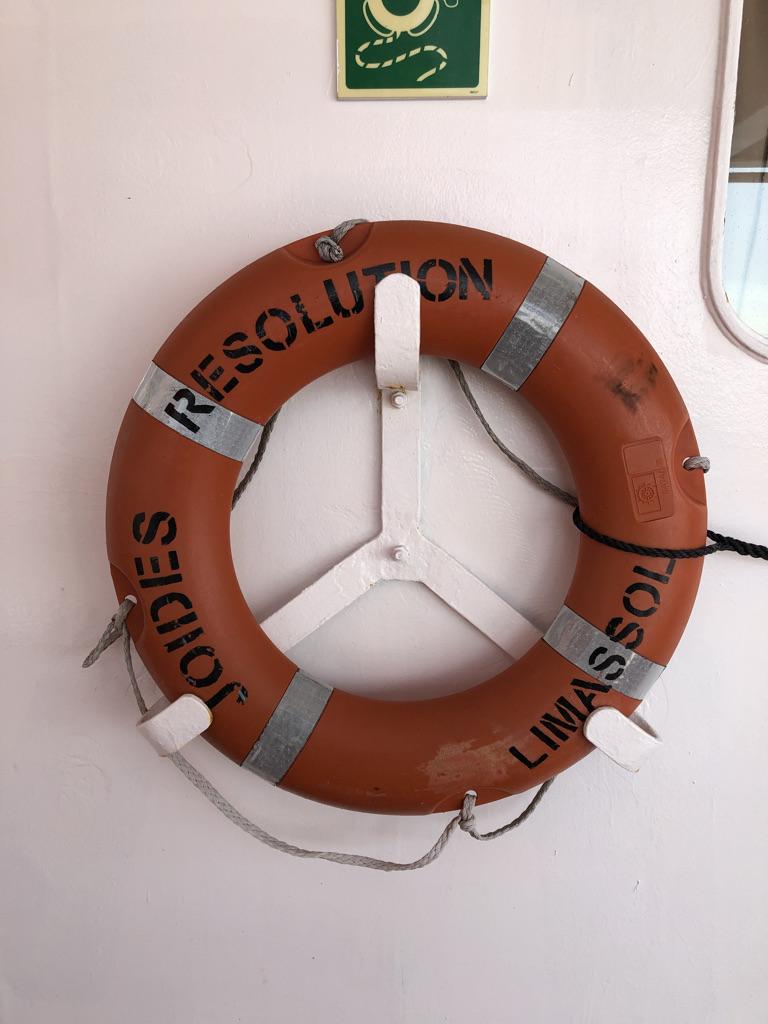 I woke up early, finished packing, and left my hotel room in anticipation of seeing the research vessel, JOIDES Resolution for the first time in nearly five years.  Upon checking out many of the scientists walked out of our beautiful hotel called The Commodore Hotel to enjoy the sun’s rays on our faces for the first time in over a week for me (since we all had to quarantine to make sure we did not have covid).

IODP had arranged a nice coach bus for us that took us through the port and after maneuvering through the port, when I finally saw the ship, I was overwhelmed once again with awe by its immense size and grandeur.  Rising up over 200 feet stood the drilling derrick sitting on a ship nearly 500 feet long, equivalent to over one and a half football fields long!  Above us, soared the upper decks, and various cranes busily loading crates and boxes of all types of equipment and stores we will need during our voyage. The drilling derrick was behind all these exciting movements; an imposing edifice that was as tall as a twenty-story skyscraper.  Everyone who got out with me looked up in amazement at our new home for the next eight weeks.

For me, it felt like the first episode of nearly every Star Trek series, in which one of the cast members is heading for the ship by shuttlecraft and then is amazed when they first see it.  Indeed, this research vessel is the 21st century equivalent of those futuristic starships as we are from countries around the world and we are all enthralled with exploring and making amazing discoveries on our own planet.  The overwhelming feelings that one gets when an amazing lifetime adventure is close at hand was permeating my soul.  I guess I would describe feeling it as enthusiastic magic.

I quickly made my way up the gangplank and suddenly, it was official, the start of the IODP Expedition 393 expedition had indeed begun.  I was greeted by a person who escorted us to our room where I quickly dumped my stuff in my sleeping quarters.  The room was surprisingly spacious for being on a research vessel, however, for me, the purpose was to sleep there and enjoy and seize the adventures that lie upstairs.  I began to revisit many of the places that brought back magical memories of the previous three times I took part in oceanic expeditions on the JOIDES Resolution.  I walked into the core lab and even though I had worked there for nearly six months of my life (I was part of three 2-month long expeditions), I was still amazed by it.  It truly looks like something out of a Star Trek episode.  State-of-the-art computers and programs for the scientists to log the data they acquire and observe.  The latest high-tech instrumentation to gather the data from the sedimentary and rock cores.  Just WOW!

I then went up to the bow of the ship, which is my favorite place to gaze out at the sea when we are in the middle of the ocean.

Also to bring back more of the great memories of the previous three expeditions in the center stairway are the logos from every expedition that took place on the JOIDES Resolution and I found the logos from the three previous expeditions I was on.  It melted my soul as I relived some of the magical times I had on this research vessel.

The day ended with a few of the scientists watching the sunset at the bow of the ship.  The magic of the colors is just a mere prelude as this newest adventure is about to begin.