Getting on the JOIDES Resolution
Getting ready, in rough seas (new instruments, teaser cores, and more…) 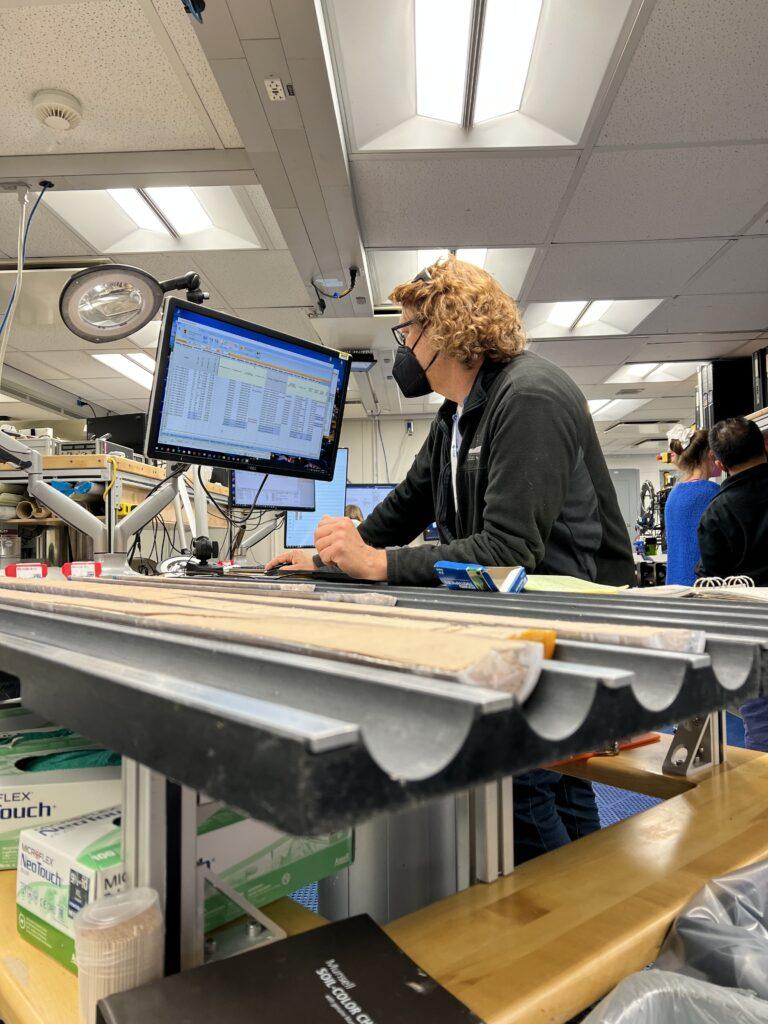 It has been eight days since we left Cape Town.  We have gone through mighty storms with 20-foot waves and howling winds as well as now calm almost glassy seas that extend far and wide.  Up until today, the sedimentologists (as well as the physical properties scientists and biostratigraphers) have been busy working 12 hours a day describing, making observations, and collecting data on the sedimentary cores.

You may ask, how did we get sediments so quickly as we must transit about a week to get to our first site?  The South Atlantic Transect comprises a total of four expeditions, of which two expeditions were done during the height of covid so only skeleton groups of science technicians with no scientists went out to drill into the sea bottom to collect cores.  So one of the brilliant ideas of the co-chiefs was to have us describe and collect data on these cores during our long transit to our first site!!

During our 5 days of describing the cores, we have been like detectives collecting clues about what the surface waters (from the fossils of organisms that live in the upper part of the water) and what the bottom water conditions were like million to tens of millions of years ago.  Try to imagine these sediments are under 15,000 feet of water and then are buried hundreds of feet below the sea floor.  For us, these water depths are immeasurable to the mind.  It would be like stacking 9 World Trade Centers, one on top of each other.  The sediments have been laying buried under hundreds of feet of overlying sediments, being compressed and squeezed into the compacted sediments we examined today.

Life on board the ship can be exhilarating when the seas are not angry since we can go onto the decks to enjoy the expansive seas of the South Atlantic Ocean.  In fact, I am writing this blog sitting on one of the many picnic tables near the front of the ship.

However, for about three days we had a mighty storm that felt like we were perpetually within its ever-threatening winds that picked up the water forming 20-foot waves that smashed against the ship seemingly endlessly during our resting hours.  The waves would rise the huge JR up and then with a loud boom, the ship would smash into the next wave.  Since I like adventure, I would sneak out onto the deck (albeit quite close to the door!) to observe some of this storm that created a chaos-like scene during the day.  I did go once or twice onto the deck at night, but under the frown of night, with the anger of the ferocious winds attacking the ship and its towering drilling derrick, a starless sky that was like a black wall of impenetrable darkness, I decided not to linger too long.

My typical day starts later in the morning (as I work from noon to midnight), with me doing on most days a 35-minute cardio video, shower, and then, if the weather is permitting, going out onto the deck to connect with the vistas, sounds and smells of the ocean.

Before I head to work, I ALWAYS go outside to feel the wind on my face and gaze out at the immense ocean that fills the view as far as the eye can see.

I wait for the noon meal in which the chef truly takes pride and joy in taking care of all of us.  He knows what people can and cannot eat and is always trying to find new ways to have us enjoy the large assortment of foods.  We have an expansive salad bar, cheese, and fruit section as well as at least four entrees per meal time, which are four times a day.  The cafeteria is a relatively spacious place, all of the conveniences one would expect from a cafeteria-style place: an ice cream machine, dessert display refrigerated case, soda machines, coffee, and toaster.  There are always a few choices and so far, I have always found something that I like.  Above the galley are the conference room and the chemistry labs.  I work in the sedimentology lab, which is above the conference room.  We also share the floor with the biostratigraphers labs, physical properties, and the downhole loggers.

More on what we do next time.