Getting ready and setting sail

What is a Seamount?
Explore the Louisville Seamount Trail using Google Earth 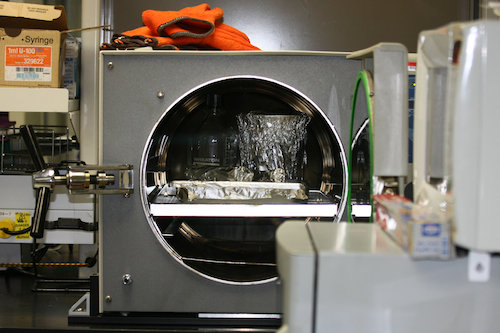 Here I talk about what kind of scientists are aboard IODP Leg330 and what they study, plus a bit about how I am preparing for my sampling routine.

Getting Ready and Setting Sail

Hi, welcome back to my blog.  I spent the past few days with the rest of the cruise participants preparing for our cruise.  This involved meeting the other scientists, IODP staff and ship’s crew.  There are more than 100 people sailing on this cruise!  The ship is 471 feet long, though, so we have space for everyone.

The rest of the cruise participants are all friendly and eager to sail.  We have ~30 scientists on board from the US, Germany, the United Kingdom, Australia, Switzerland, France, China and Japan.  I am the only microbiologist on this cruise, but we also have:

Geochemists- scientists who use chemistry to understand how rocks are formed.

Igneous Petrologists- scientists who study igneous rocks.  Igneous rocks are formed from magma, or lava, and are the type of rock that will be found on this cruise (mostly basalt).  Igneous rocks are also found at places like mid-ocean ridges, where most hydrothermal vents are found.

Paleomagnetists- scientists who study the magnetic inclination of rocks to determine the history of geologic formations.  When igneous rocks cool, they adapt the magnetic compass of the magnetic North Pole.  This actually reverses every so often and you can track if a rock has moved from where you would expect it to be by knowing its age (from the petrologists) and magnetic field.  Pretty cool!

Paleontologists- for this cruise, there are scientists who study tiny organisms such as forams and coccolithophores, to determine how old different layers of sediment are.  When I say tiny, I mean 10 microns and larger.  However, most of the microbes I study are even smaller- <1 micron.  For reference, approximately 25,000 microns = 1 inch.  That means that if you could line up 25,000 of my favorite microbes next to each other, they would all fit in an inch.  That’s small!

We left Auckland at 7:30 am on 18 December 2010 and are all learning about the ship and our labs and what we will be doing when we begin collecting samples in a few days.  It takes about 3 days to arrive at the first site.  One way I am preparing is by sterilizing some of the equipment I will be using to collect my samples.  In this blog’s photo, you see some of my instruments sitting in an autoclave, eagerly awaiting sterilization.  An autoclave is an instrument that heats up objects to 250F and applies high pressure.  The intense heat ensures that any potentially contaminating microbes will be killed, and the high pressure allows liquids to be heated without evaporating.

Join me next time, when I’ll be talking as bit about the drilling technology we will use…