What comes next…following up on this cruise
The question 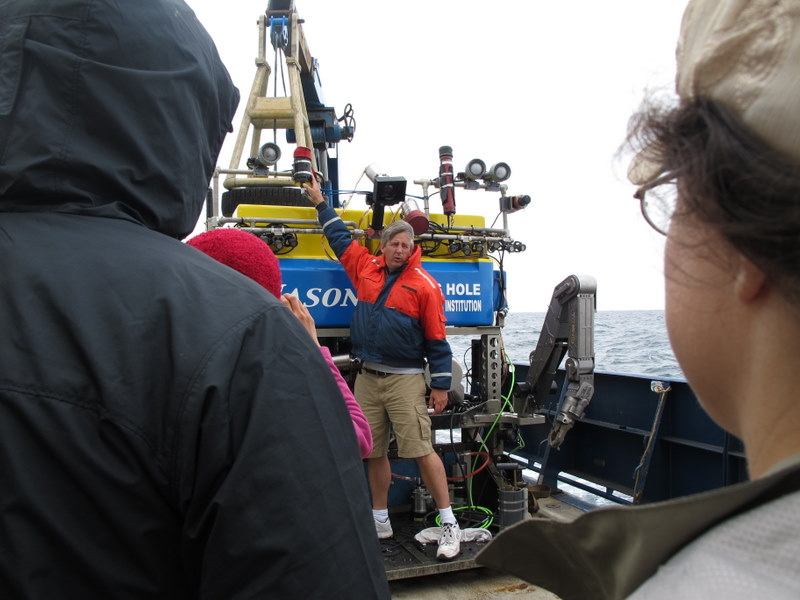 So as this expedition ends, I am reflecting on three weeks with the JASON ROV. It is a truly amazing piece of technology. It becomes our eyes and muscles on the seafloor as we humans attempt to work in an incredibly harsh and difficult environment. It takes an amazingly talented and dedicated team to bring it to life, keep it in good health, manage its movements and bring it up and down from the seafloor and its various tasks. It makes this kind of seafloor and below-seafloor science possible.

Today we had two video broadcasts with two different groups – one at the Smithsonian’s Ocean Hall and the other at the Pacific Science Center camp in Seattle – and we were able to give both groups a great live walkaround of the ROV. Tito, the expedition leader – who was, by the way, the dishwasher on the Knorr when the Titanic was discovered in 1985 – gave everyone a great tour of the vehicle. He described and demonstrated the robotic arms, the cameras, lights, electrical connections and sample-gathering equipment on board. The students chanted "JASON, JASON, JASON" and had a bazillion great questions for him. This is the kind of technology that lights up students’ eyes, inspires them, and gets them excited about exploration and discovery.

So it’s been a great few weeks and I am honored that I was able to sail with JASON, learn about its capabilities, spend time with its team, and participate in this very successful expedition to the seafloor. And now it’s time to say good-bye to JASON.

But my husband is also Jason and I am feeling relieved to be going home again to my family. So good-bye to one JASON and hello to the Jason who belongs to me, and our three little boys, who I miss very much – Reuven, Judah and Yaron!

Author:
Sharon Katz-Cooper
About:
Sharon Cooper is the manager of education and outreach programs for IODP in the U.S. She has been with the program since 2007 and sailed on the very first School of Rock.
More articles by: Sharon Katz-Cooper