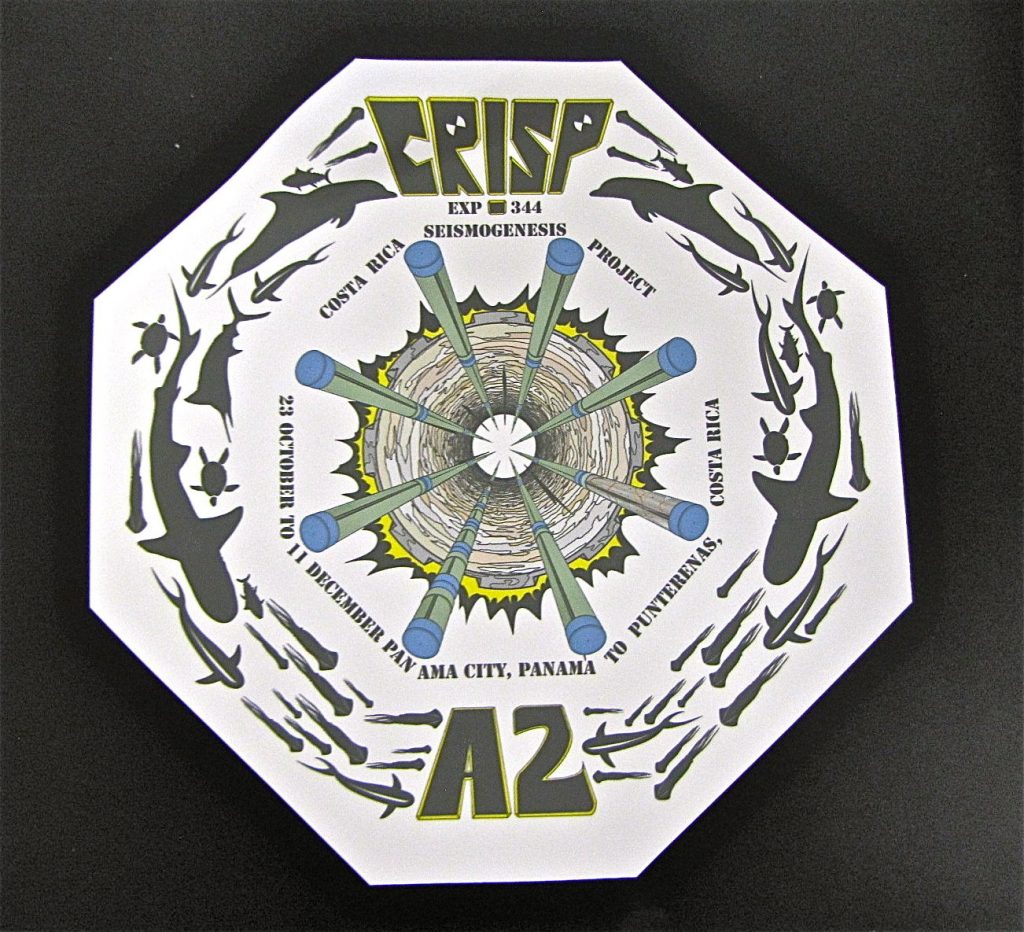 Around 9:00 pm last night, they started pulling up cores where the entire core is a light gray.  There were so many cores that it was today before these cores made it to the sample table.

They had decided to switch to RCB coring because they were getting into harder sediments. This takes some time since they have to drop the FFF (Free Fall Funnel), a 7.5 foot diameter cone with a 13 inch funnel, down the string into the previously drilled hole. Then, they try to hit that funnel with the mile-and-a-half long piece of pipe dangling from the bottom of the ship through ocean water to re-enter the hole with the new coring assembly.

They give the Captain a “little help” by attaching a grainy camera near the end of the pipe. The 7.5 ft diameter cone is the black and white striped circle at the top of the screen, and the shadow of the drill pipe is on the right and the actual mile and a half long drill pipe is coming down from the top. The spotlight is provided by the white circular device on the left of the screen. The world’s toughest video game! Kudos to Captain Skinner and crew, who have to maneuver the ship to get the pipe into the funnel!

Since all of that took time, scientists were able to catch up a bit on sampling and testing all of the cores we had already brought up. I had time today to work at the sample table!

The light gray cores turned out to be mostly made of a calcareous ooze with lot’s of radiolarians (the micropaleontologists are happy!), rare sponge spicules, and intermittent layers of darker volcanic ash.

It was easy to sample since it was softer than some of the previous lithified  samples.  Lot’s of PMAG (Paleomagnetic) samples!

Each Resolution expedition hosts a T-shirt design contest.  It must relate to the current expedition, and include something about the science. There were seven entries, and everybody on board votes.  And the winner is…

After the winner is selected, everyone turns in either a dark T-shirt, or a light T-shirt, and they press on the design for free!